An intimate account of survival in the face of adversity…. 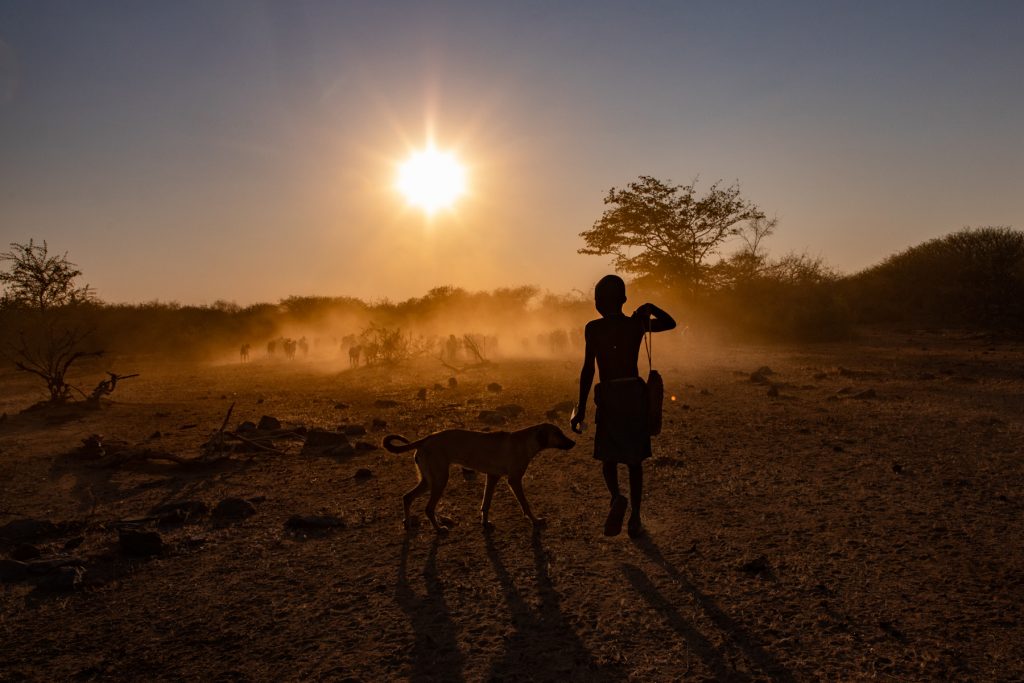 “Don’t go anywhere near that! That’s how they trap us!” yelled out an older Mucubal boy to his two younger brothers.

We had encountered them as the sun was getting low in remote Angola. My guides and I were looking for a place to camp, hoping to stop with a local group of Mucubal people in one of their beautiful, ornate villages.

Before I continue, I should tell you that everything Mucubal people do is beautiful. Their huts are like arid igloos sculpted in white clay, their women wear layers of simple brass bracelets across their arms and over one of their legs, their men wander the countryside with neatly shaved hair and a loin cloth made from colourful Mucubal fabric. The crowning glory of Mucubal beauty, in my opinion anyway, is the Ompota worn by Mucubal women. These large hats are fashioned from wicker which is kept rigid by being filled with dried cow’s tails. Once created Mucubal women cover their Ompotas with brightly coloured fabric scarves. 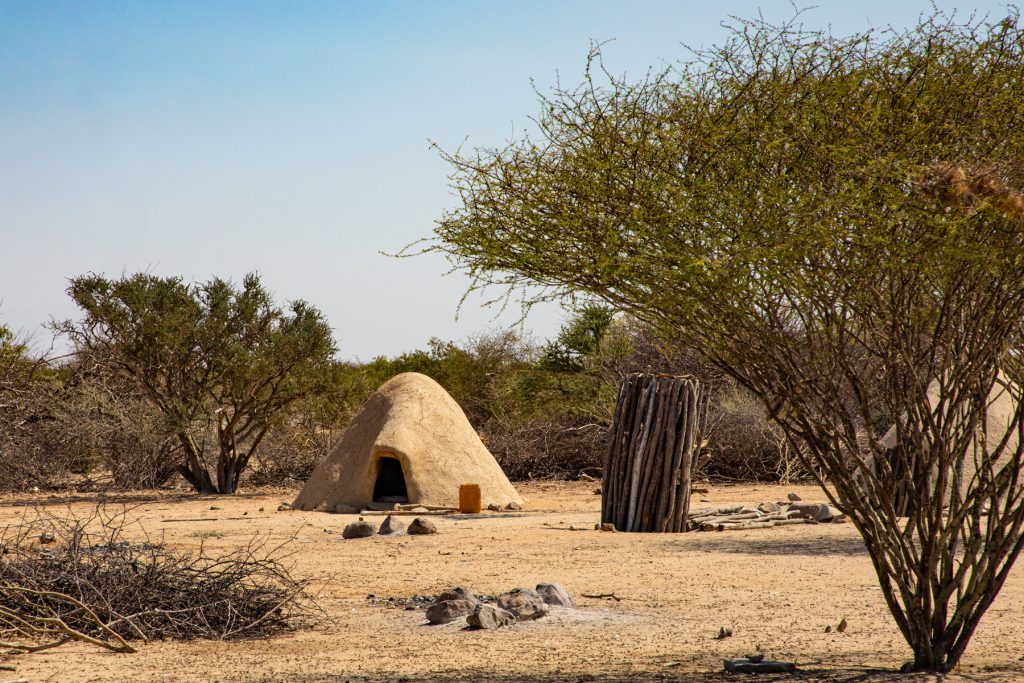 Failing to find a village that late afternoon we decided to drive to the closest town when we met them, a group of young Mucubal boys returning to their camp from a day of herding livestock. We wanted to ask them about the whereabouts of their village and as soon as I got out of the car, they saw me as some type of tall, white ogre with blonde hair and they ran off screaming in to the bushes. My guides and I stood next to the car laughing. “Oh come on! I’m not the big scary person they think I am” I said to my guides. “What’s going on here?”. My guide, Joao, said “I’ll take a bottle of water over to them so they can at least drink” and then we took the water to a place around 150m away from us. It was then that the ‘They’re going to trap us!’ conversation took place.

Laughing, and still unable to determine how far their village was away from our car we eventually waited until the boys fetched their parents to consult about their safety in the face of these strangers. 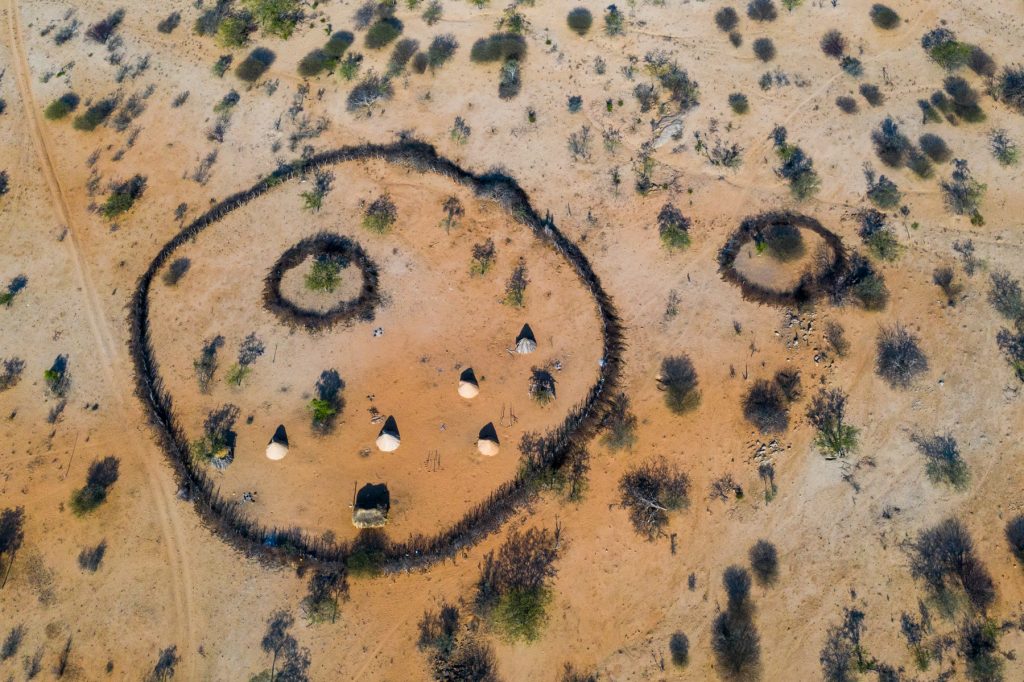 Soon after their parents appeared from behind the bushes, I went over, smiled and introduced myself. Mahovilo, the oldest of the Mucubal women in her family held my hands, hugged me and kissed both my cheeks. We told them what had happened with their young sons and we all laughed. Mahovilo screwed up her nose, threw her head back in to the air and laughed loudest. 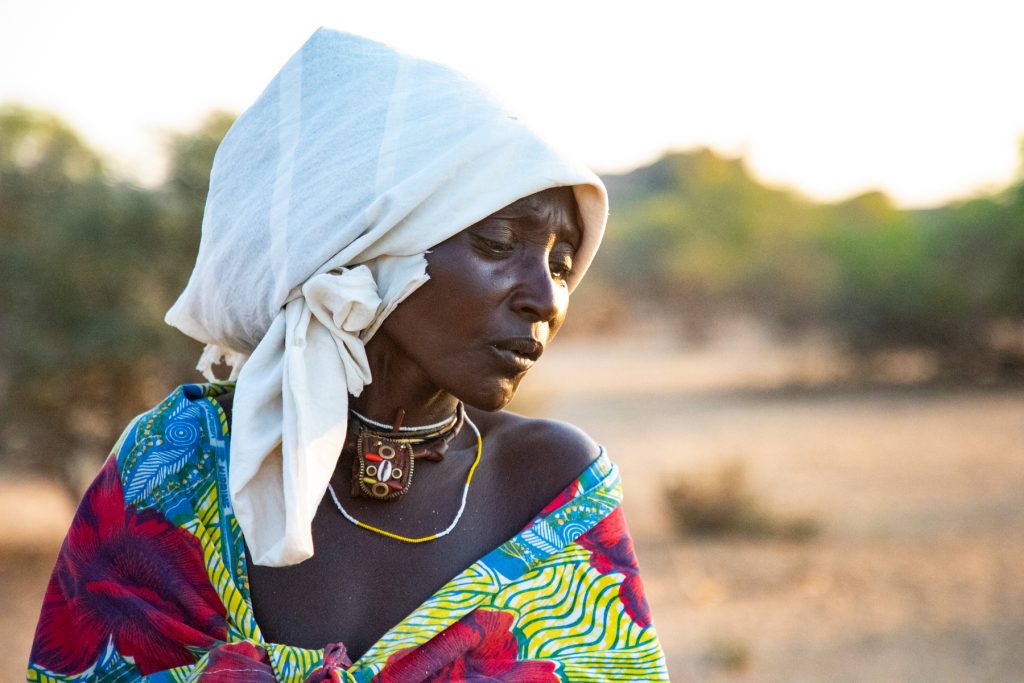 Beautiful Mahovilo. She is wearing a Ngombe around her neck. To the highly spiritual Mucubal people, this amulet symbolises Mahovilo has cattle. During the extreme drought of Angola, sadly, I never saw her with any (Image by Inger Vandyke)

After all, good parenting isn’t monopolised by any one specific group, ethnicity or nationality. Stranger danger makes sense everywhere, even in remote Angola.

Before we could even ask, the family invited us over to their camp.

In all my travels around tribal people in Africa, I have always been extremely humbled by these invitations. It is always an honour to be the recipient of such a kind gesture and some of the most memorable nights I’ve had in Africa emanate from nights around a campfire chatting to local people through awesome translator guides. Through them I have learned and laughed so much. These encounters have shaped who I am and I carry something from every one of them with me every day. 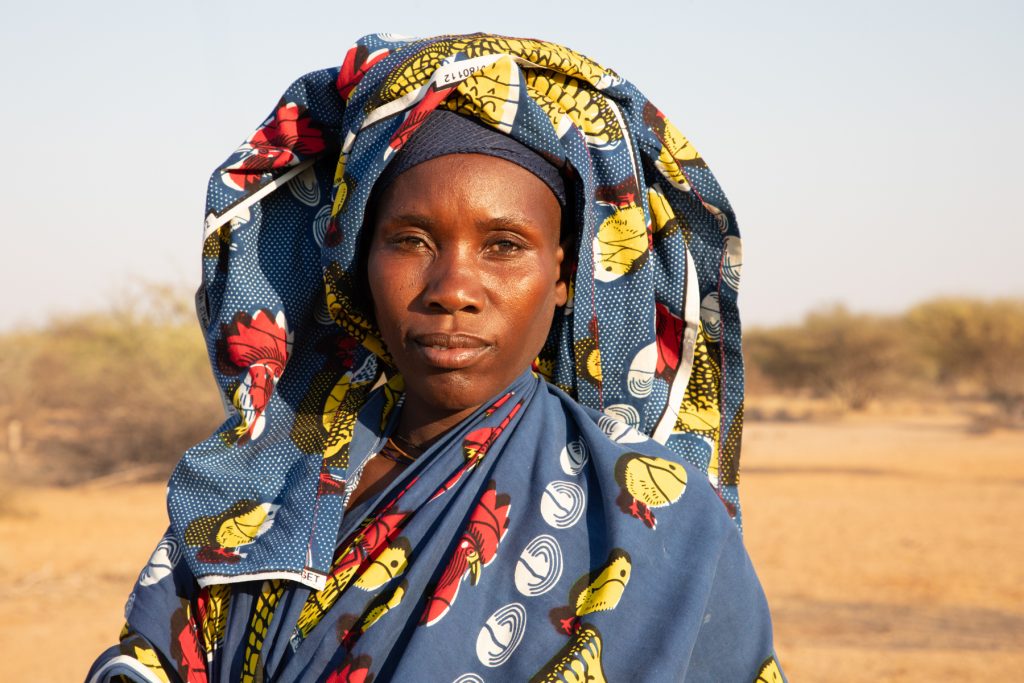 We wandered through the acacia bushes back to their makeshift camp. “We shouldn’t camp too close” I suggested to my guides. “I don’t want to overstay my welcome.”

We set up around 100m or so away from this family and I asked if it was OK to wander over and take photos. We arrived while a young Mucubal girl name Mbapumbika was grinding flour to prepare for dinner. I watched the methodical way in which she ground grain against a stone. Despite her young years she knew routinely how to do this, storing her ground flour in a beautifully hand woven Mucubal basket carrier. 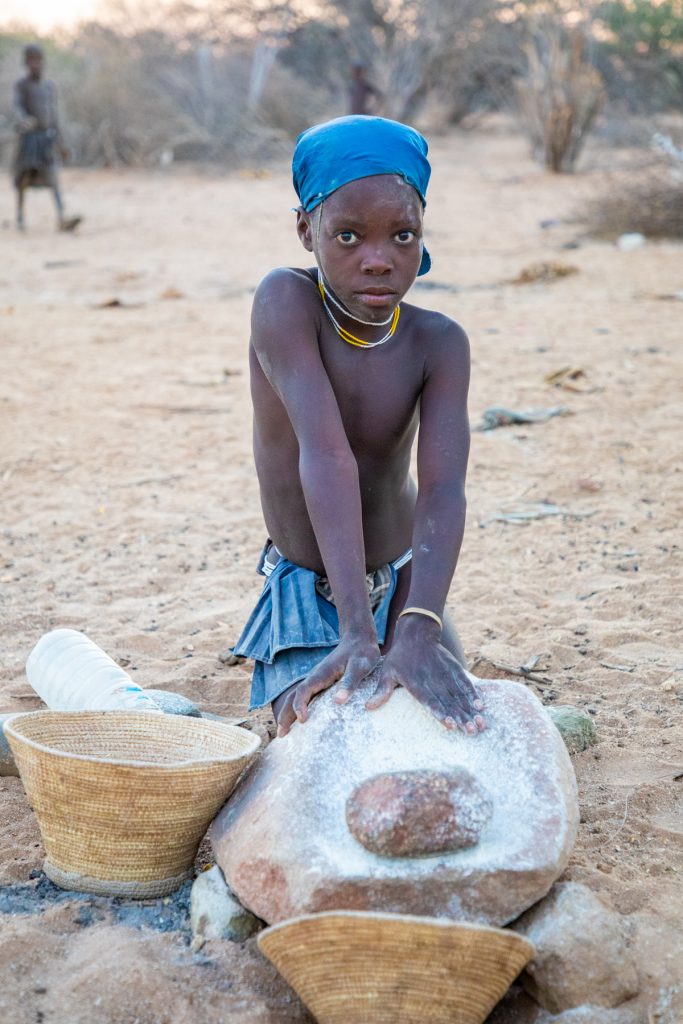 As I watched, I noticed Mahovilo out of the corner of my eye. She was carrying a huge piece of wood towards the fire. I stopped and went over to her. Being a much larger person, I carried it for her towards the fire. She seemed relieved. 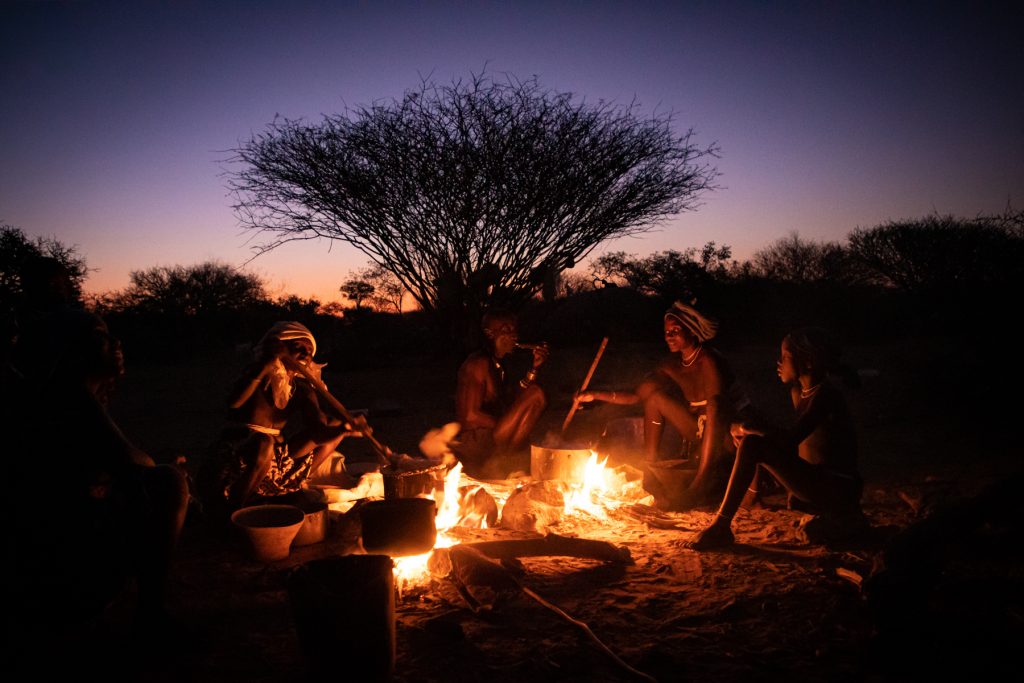 Around the fire at sunset (Image by Inger Vandyke)

As the sun set and a fire was lit, Mahovilo began to prepare for dinner. I lingered only long enough to take a few photos. From what I know people with nothing will always share what they have in remote Africa. These people were suffering through a drought. I wanted their food to be theirs. Instead, I went back to my camp where my own dinner was being cooked and I dined there instead.

After I’d finished eating we still had food left so when my hosting family of Mucubal people came by in the dark, we shared whatever we had with them. By that point, the children were no longer afraid of me and as I sat with numerous little hands touching my hair and resting on my knee we chatted about the drought and how it was affecting them. 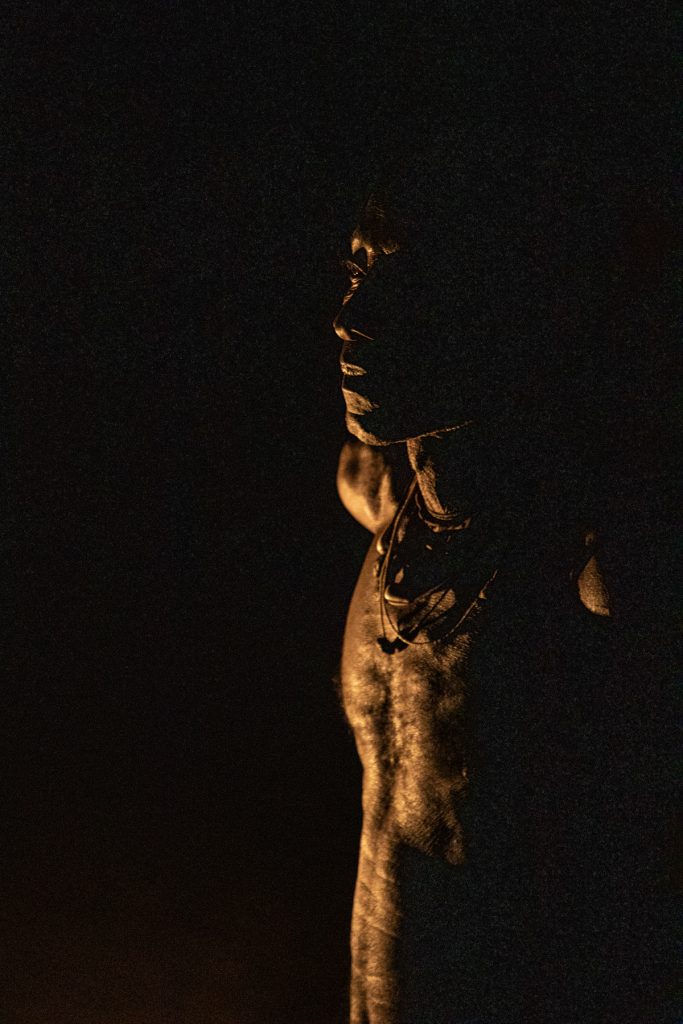 Kamundimba, the Soba (or headman) of the nomadic Mucubal family I stayed with (Image by Inger Vandyke)

This family were on the move from their region towards greener pastures, hoping to get much needed water and grazing lands for their livestock. Where they were heading was still well over a hundred kilometres from our camp. I wondered, honestly, how they were going to make it. Their only way to reach it was on foot.

The Issue of Drought in Angola

I had confirmed my Angola travel plans long before I was aware of any drought that was going to happen. Upon hearing the news of no rain in southern Angola, I almost pulled out of travelling there. I have, however, been around Himba people in northern Namibia, during droughts before. As I was too heavily committed to this trip, I decided to go anyway and just take more food and supplies than I would normally account for, to give to people I met along the way.

What I didn’t realise until I arrived, was the true gravity of the situation the tribes in southern Angola were facing. People were sick, many were on the move to try and find water. The lucky ones were still drawing water from the tiniest wells dug in to ephemeral rivers or they had access to one of only three large tanks of water that the Angola government had delivered to the entire region. 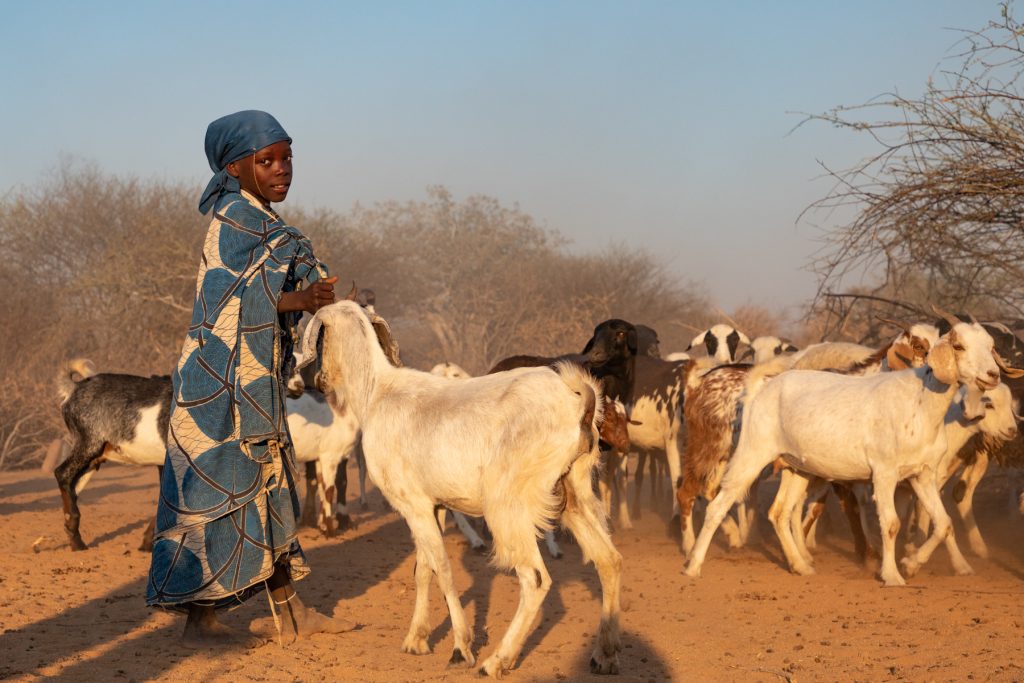 Mbapumbika taking her goats out to graze, her mini Ompota on her head (Image by Inger Vandyke)

Food for people had been delivered also but this had to be rationed. I was stunned to discover that a 25kg bag of rice would need to be shared by 100 people, that a one litre bottle of oil was t be shared between 6.

Surviving livestock was being actively sold by owners trying to capitalise on their worth before their diminished state decreased their market value. Their beloved cattle that they would normally sell for 20,000 kwanza a head were being sold for a mere 5,000 kwanza per animal. Desperate for water, animals were dying. All around me people were hungry and thirsty. Yet they were moving. They had to move. It was the only way they were going to survive. 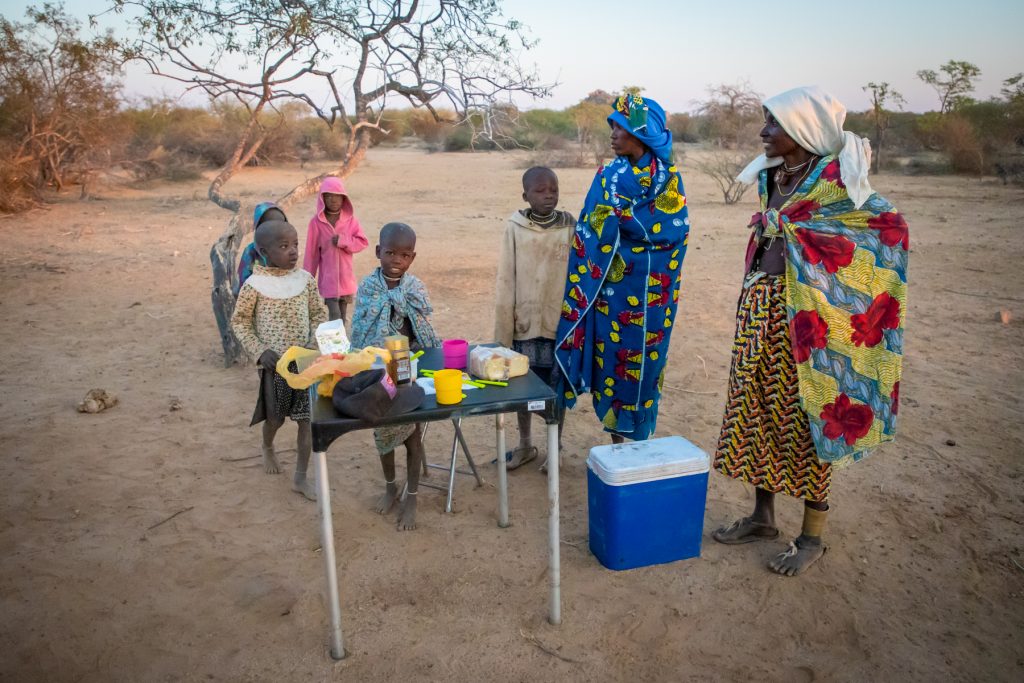 Readers of this post might be thinking “These people have seen droughts before. This is all quite normal.” What was happening in Angola wasn’t normal. This was the worst drought that these people had experienced in many years.

In our media, we read often of climate change, how it is creating mass extinctions, wild weather and migrations of people trying to escape the worst of their situations as the world warms and great change takes place. 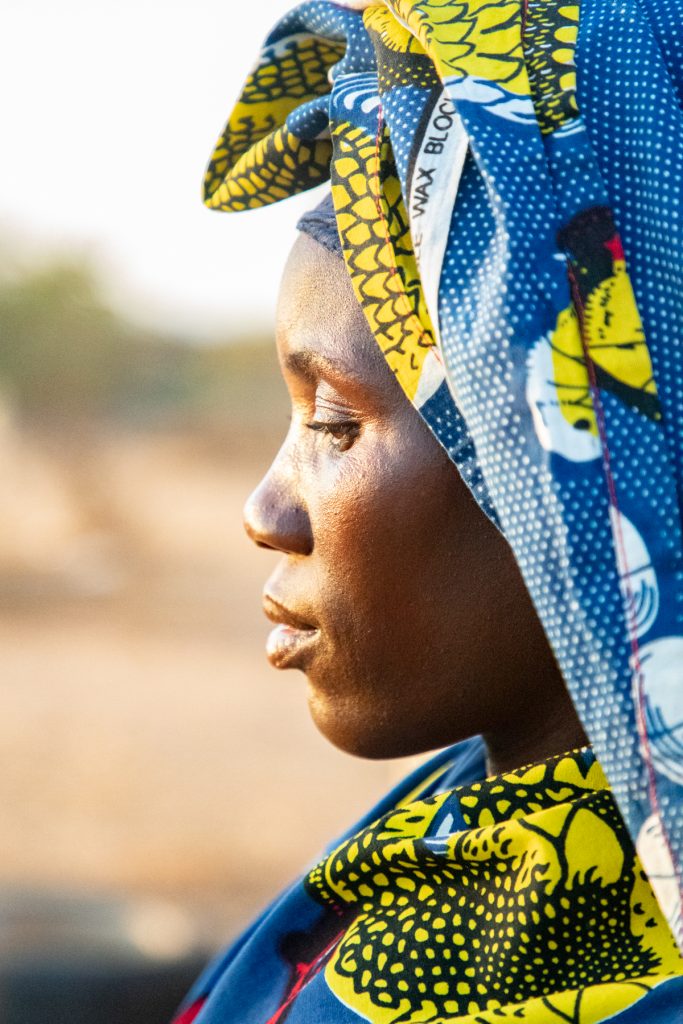 What we rarely hear about is that the frequency and intensity of these droughts is causing a great strain on some of Africa’s most treasured and beautiful tribal people. Yes they may survive a single drought but repeated droughts over several years? It is becoming too much for any of them to bear.

For someone who loves these people as much as I do, it was a harrowing situation to find myself in. 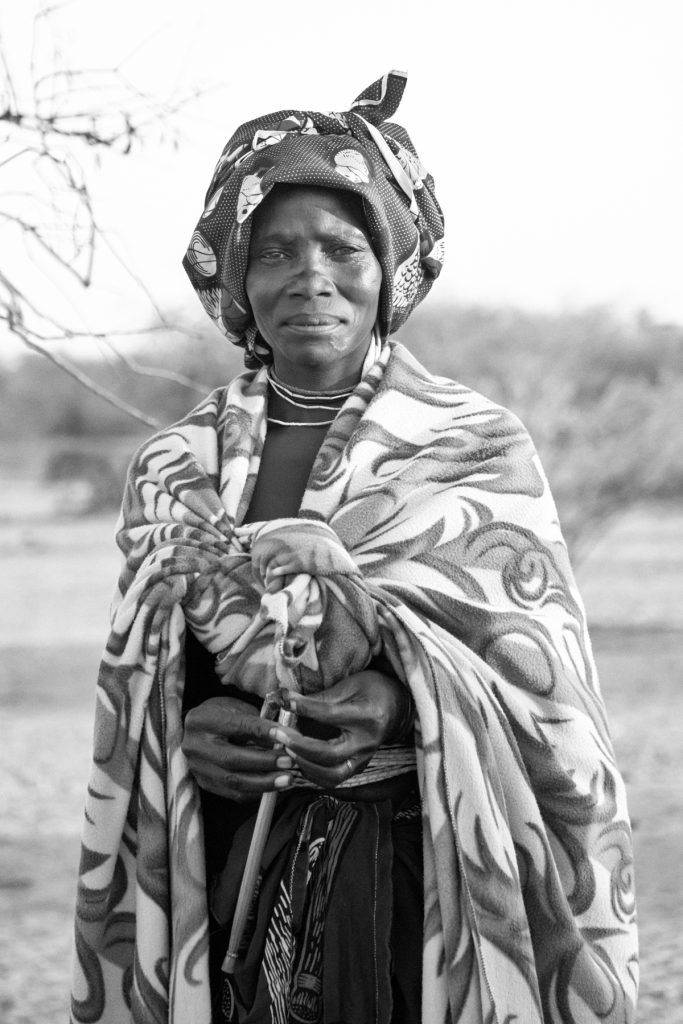 Mukwa, one of the Mucubal women in the family I stayed with (Image by Inger Vandyke)

As I sit here making preparations for my trip to Namibia next month, already I am preparing to take more than I normally would out to the remote Himba families I know. For the drought in Angola doesn’t know borders. It is well and truly entrenched in northern Namibia too, affecting the lives of the people I know well. My list not only includes food and water but also topical medicines like antiseptic creams, tiger balm etc. After all, it’s the least I can do for a group of people who live three days walk from the nearest town.

My Final Morning with my Mucubal Family

Before I went to sleep I asked Mahovilo and the Soba of the family, Kamundimba, if it would be OK for me to help the children herd their goats out the next morning. Of course they said yes. 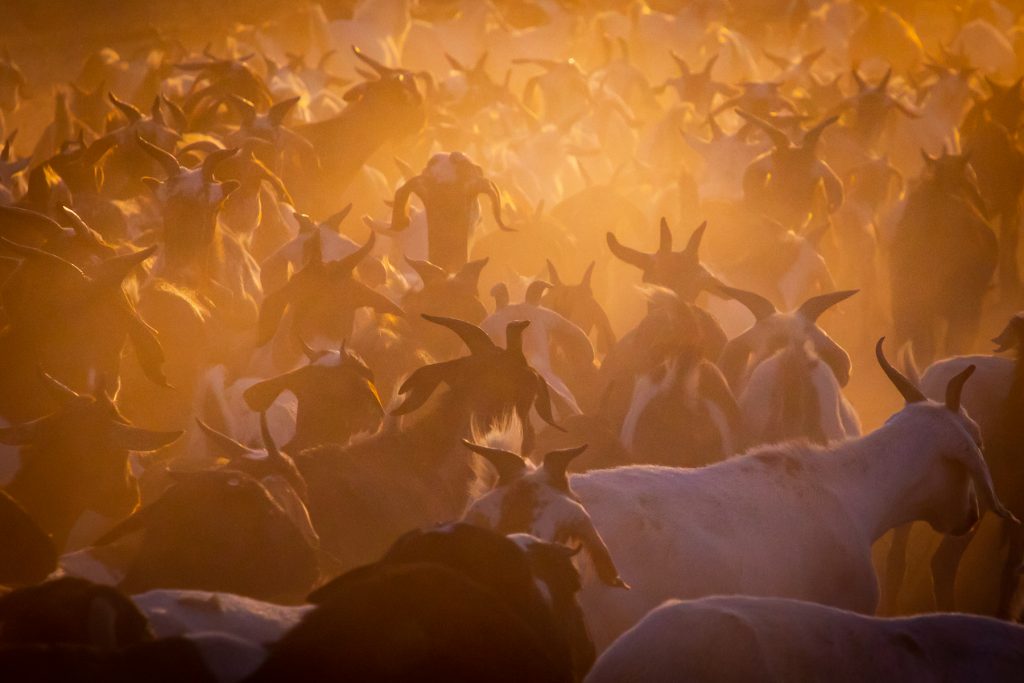 So at sunrise we had breakfast, shared as much as we could of that meal again and off I went, following a beautiful group of Mucubal children into the bush with their dogs, goats and sheep, running around in the dust. When they are small Mucubal children are fitted with a makeshift brace made from a decorated piece of animal bone, often the rib of a cow. This body brace is worn by children until they are able to walk. It helps them to walk straight and tall. When that child can walk properly the brace is removed and handed to the next baby born to a clan. 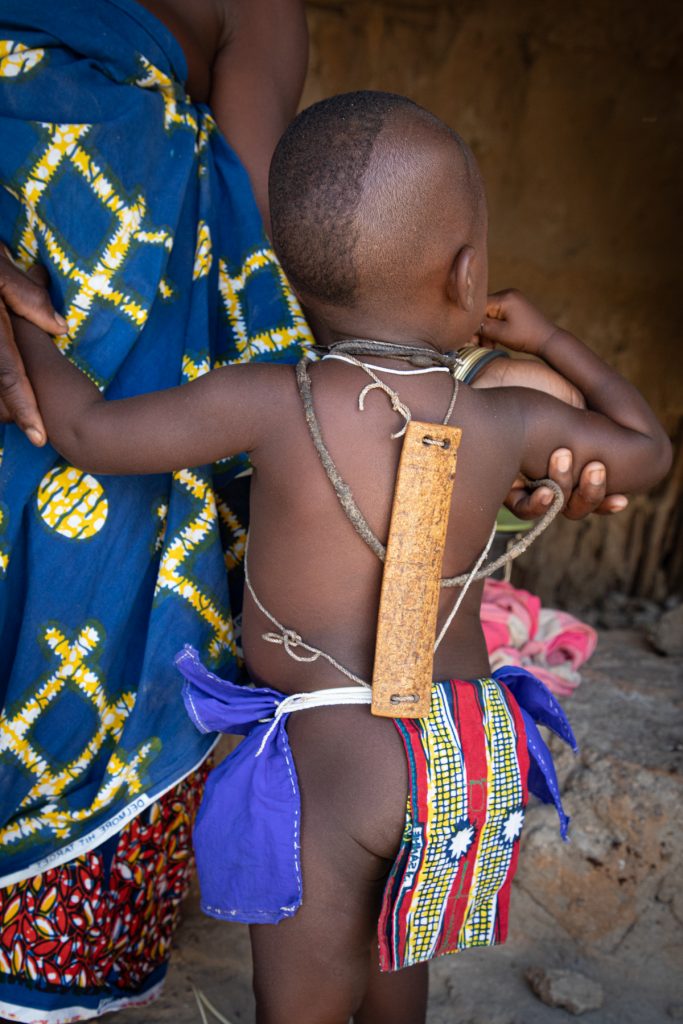 I watched these brave, tall, Mucubal children walk in to the distance, their beautiful postures disappearing in to the dust and sun. Stoically they moved on another day, just one step closer to water. 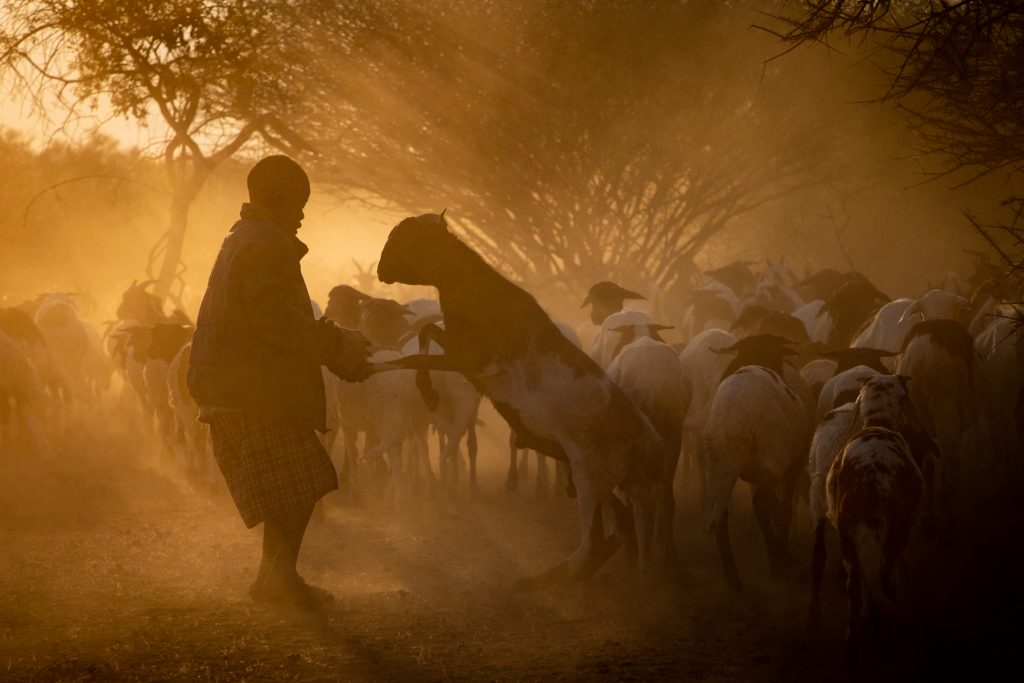 Spending time with that family moved me deeply. I think about them often, hoping they made it finally to the greener pastures they sought. Who knows when I might follow their footsteps in the dirt again. My hope is, that if somehow I find myself in their sphere once more, that they will be in a better place with water and sustenance.  And just maybe they will no longer fear the tall white lady with the blonde hair who brought them smiles and food. 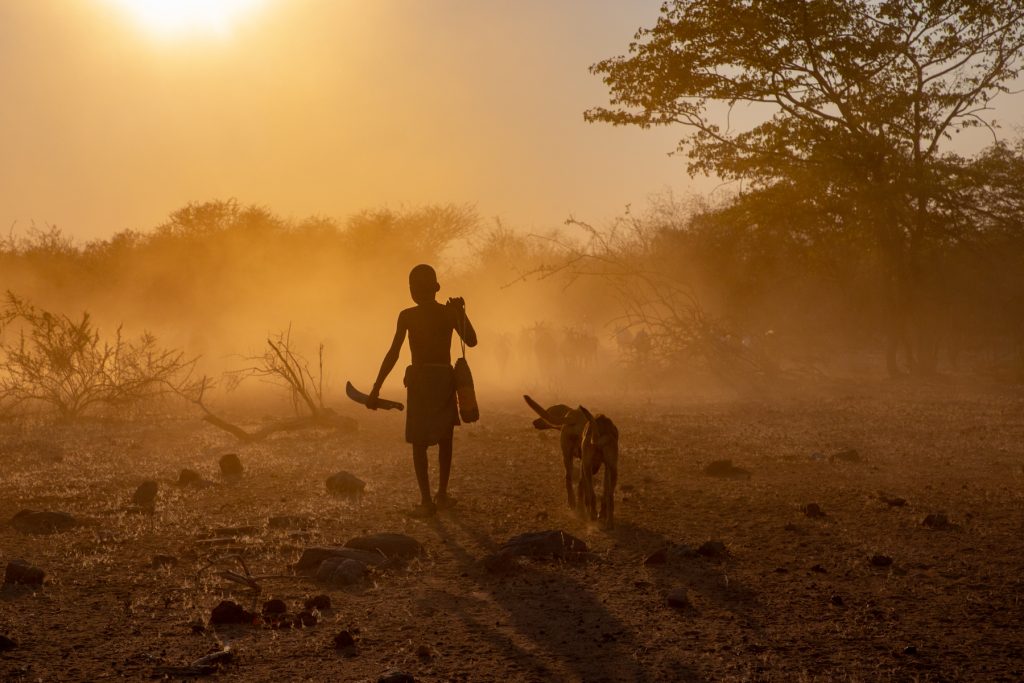 The longest journey to water (Image by Inger Vandyke)