Creatures of the Night – The Striped Hyenas of India’s Gujarat

The Striped Hyenas of India’s Gujarat 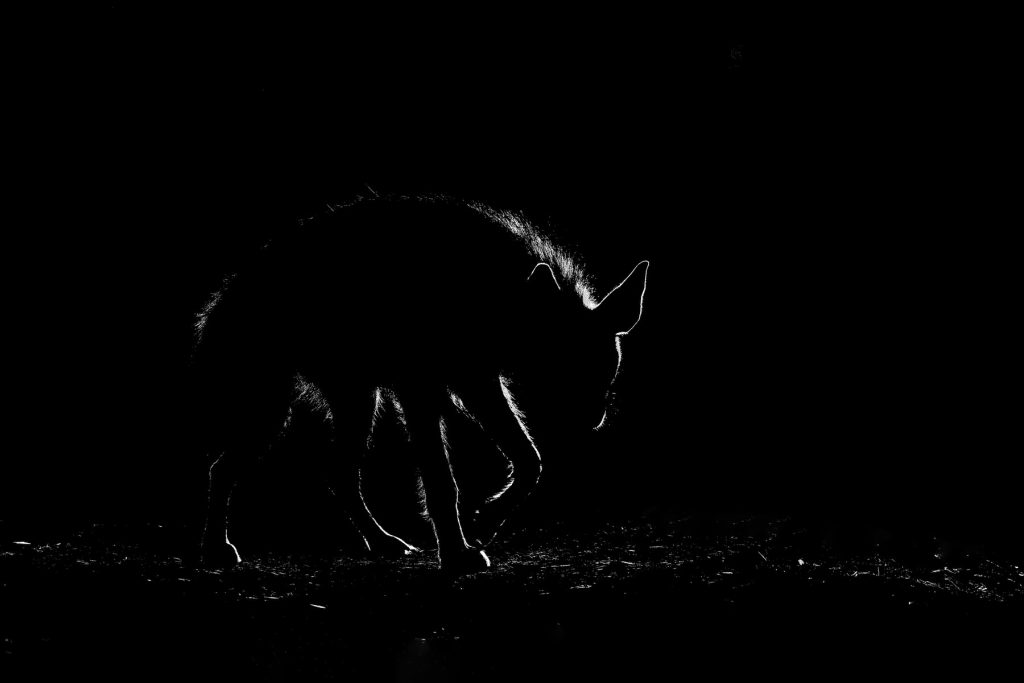 Striped Hyena, the tiger is not the only animal prowling India’s forest of the night! (Image by Mike Watson)

Continuing our theme of extraordinary hyenas, it is always a pleasure to return to a quiet little corner of Gujarat in northwestern India. Driving west of the capital Ahmedabad, fields become visibly more arid and trees and bushes fewer, even despite the influence of the Sardar Sarovar irrigation canal, which brings water here all the way from the far eastern border of the state. Our first hyena hotspot on our tour is the Wild Ass Sanctuary, in the Little Rann of Kutch (or ‘Kachchh’), a 5,000sq km reserve established in 1972 for the protection of its namesake. Flooded by the monsoon rains, it dries out to a vast parched lake bed for the rest of the year, with occasional small island patches of higher ground. 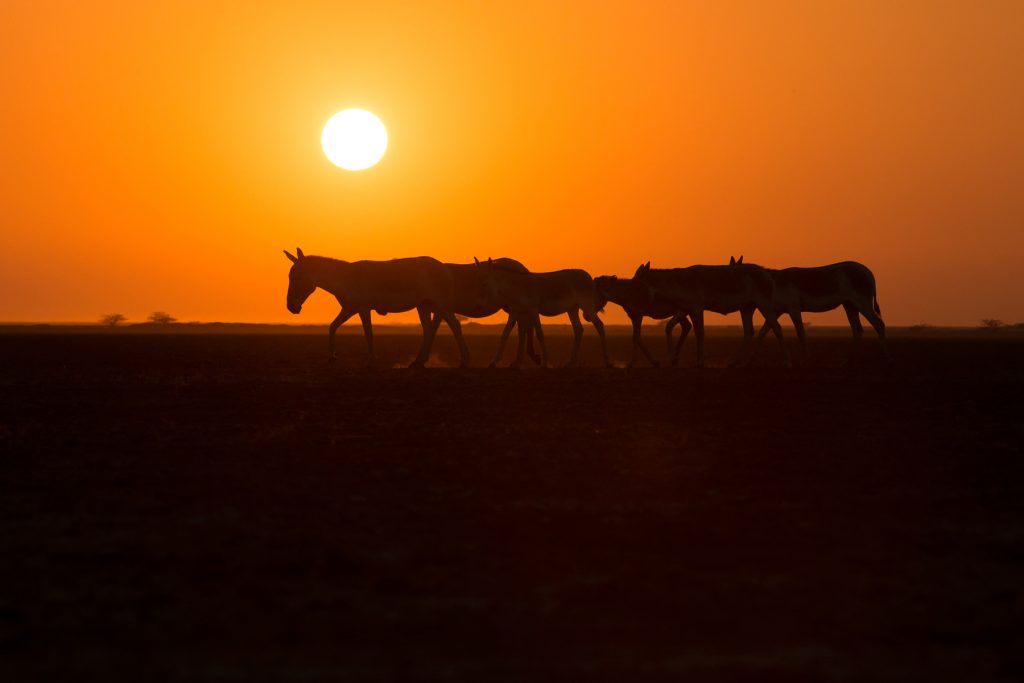 As everywhere in India, there is tremendous competition for land use between man and wildlife. For instance, salt production is not legal on the Little Rann, yet this area produces around 75% of India’s table salt! The salt flats are also grazed by zillions of livestock from the surrounding villages. A warm welcome awaits us in the little village of Zainabad, in more ways than one. 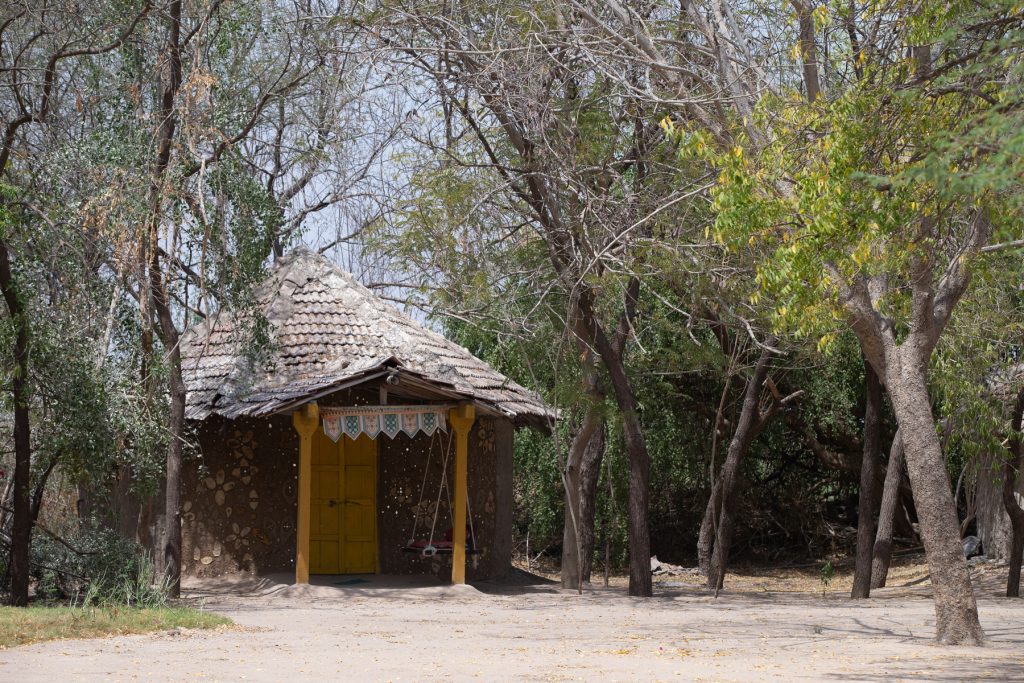 The daytime temperature in March is already starting to climb towards 40 degrees celsius and while the nights are still pleasantly cool, the days are now hot and dusty. 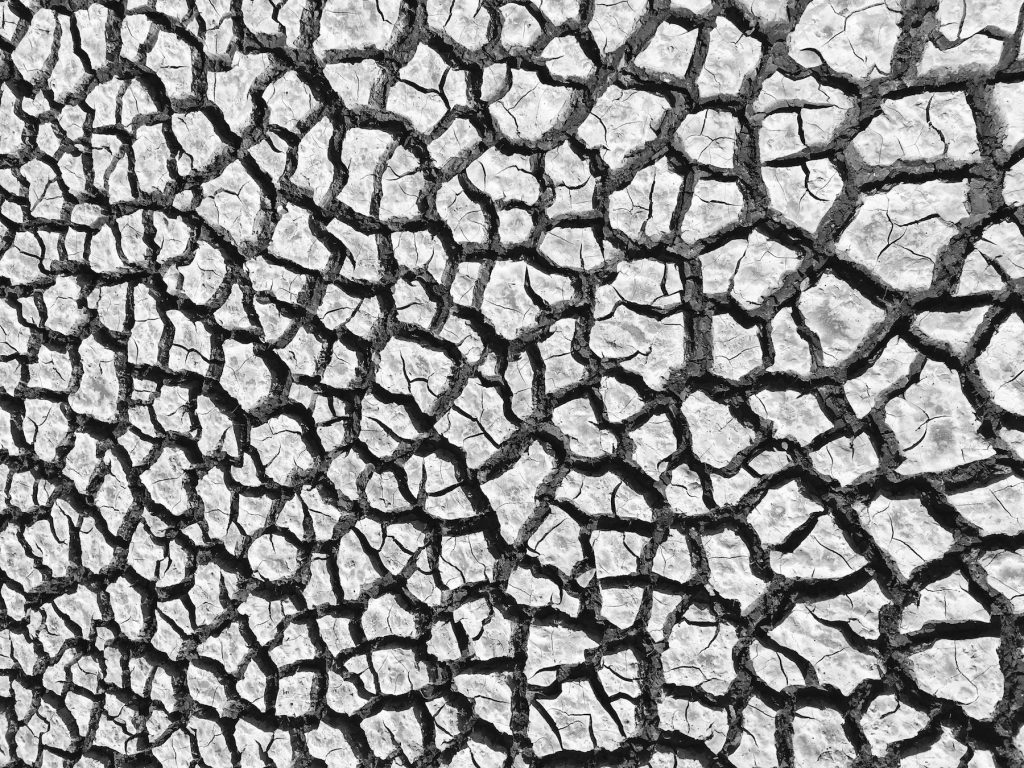 Striped Hyena has become something of speciality of the Little Rann recently, as the forest guards and local naturalists have spent time tracking them down to their dens, in the vicinity of which they can be seen quite reliably. It seems that it is an ill wind, as when other animals are dying off owing to the continuing drought in this region, the hyenas are enjoying an upturn in fortune with the greater supply of carrion. 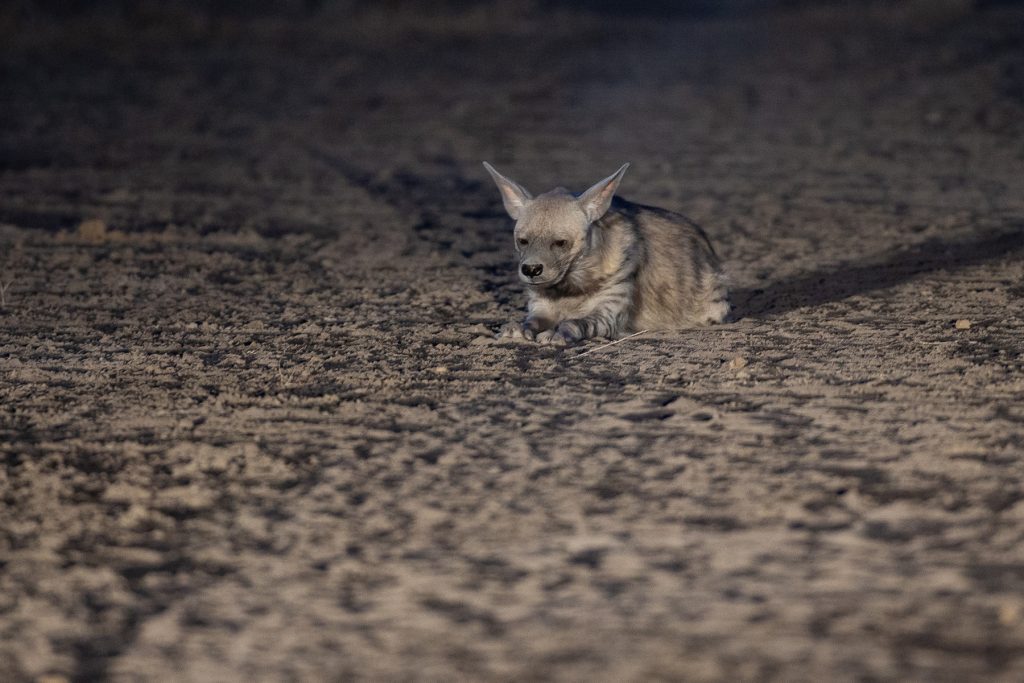 A Striped Hyena in our headlights enjoying the warmth of the salt flats, shortly after emerging from its den in the early evening (Image by Mike Watson)

Striped Hyenas are usually strictly nocturnal and as well as being quite uncommon and declining (they are listed as ‘near threatened’ by IUCN), they are consequently difficult to catch up with, despite their very wide distribution from North and East Africa to the Middle East, Caucasus, Central Asia and India. Striped is also the smallest true hyena and lacks the special skull adaptations of its larger Brown and Spotted cousins. 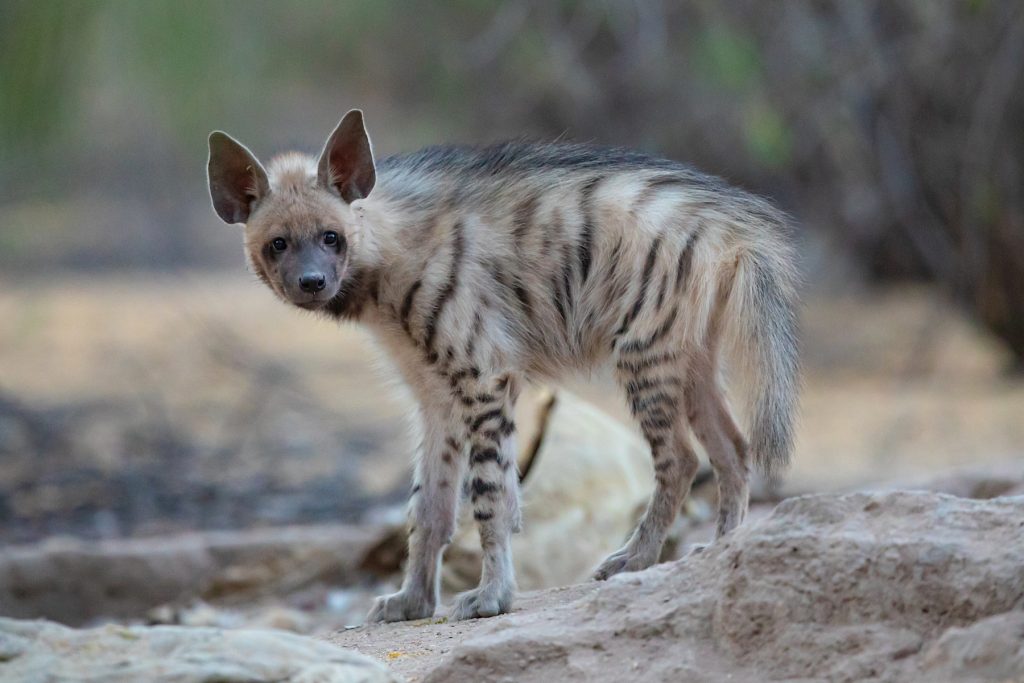 Portrait of a young Striped Hyena (Image by Inger Vandyke)

Attacks on humans are very rare and it is usually a shy and retiring creature, whose presence is only betrayed by a trail of bones to its den. We have enjoyed some successes on recent visits to the Little Rann on our India tours and with spotters posted near the various dens, we can be hopeful of an encounter. The hyenas can be surprisingly relaxed in our presence, before they slink away into the dark forest of thorns on the fringe of the great salt flats, in search of a meal. 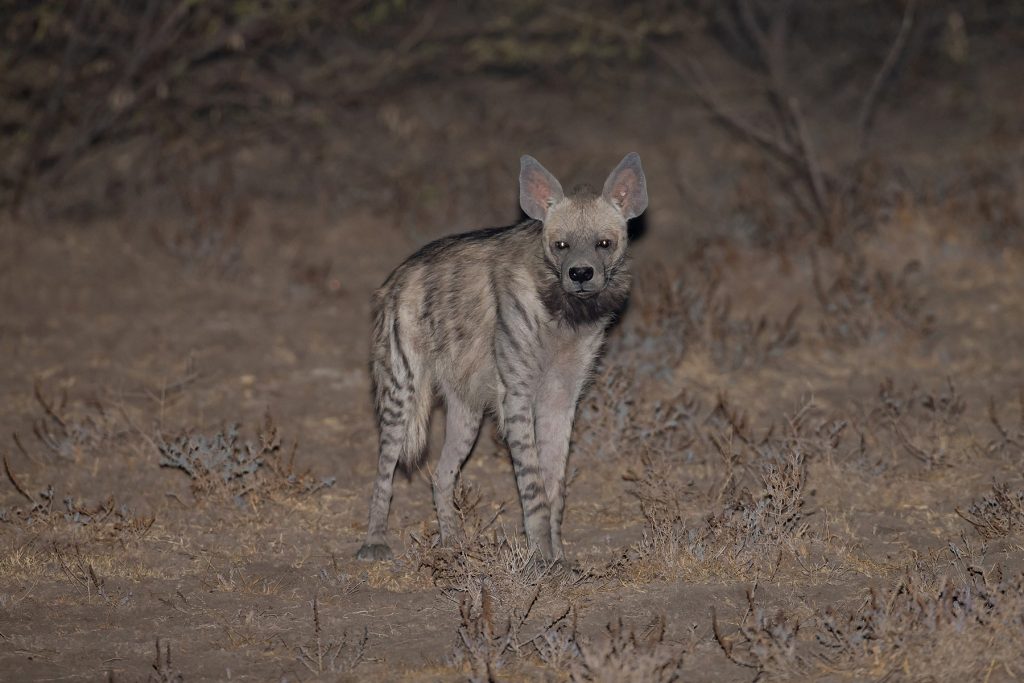 We see a lot of other special creatures of the night in the Little Rann while on evening patrol looking for hyenas. The air is usually filled with moths and other insects in the torchlight, attracting another local speciality, the delicate Sykes’s Nightjar, a regional speciality, which breeds in the Little Rann of Kutch but in winter its numbers are also increased by birds from further north. 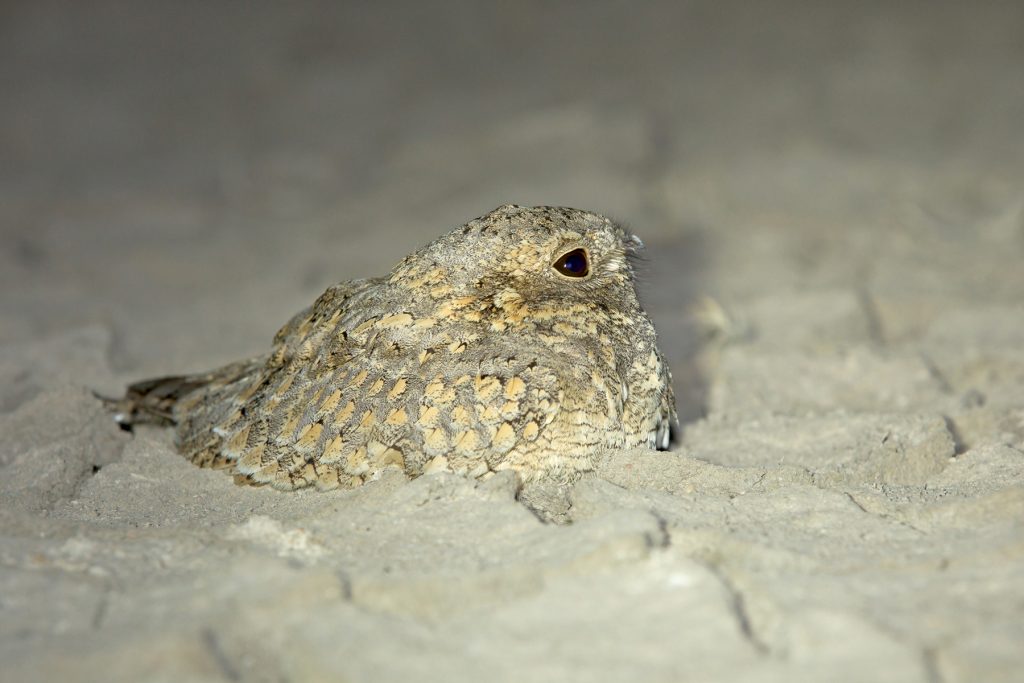 Sykes’s Nightjar, a view like this is much sought after by visiting birdwatchers! (Image by Mike Watson) 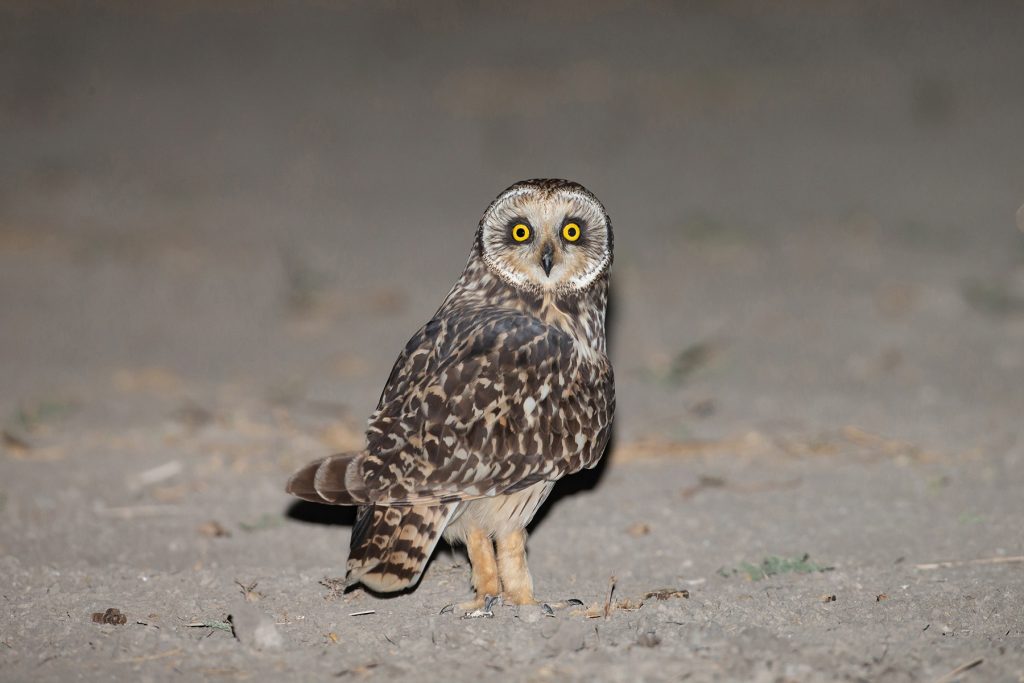 Short-eared Owls in the Little Rann of Kutch usually hunt by night, resting by day in the shade of mesquite bushes (Image by Mike Watson)

Other nocturnal delights can include Short-eared Owl, Jungle Cat and Desert Cat and, until late winter, lovely little Pallid Scops Owls can still be seen hawking for moths until the lights of our lodge or slumbering in the trees around our chalets. While the hyenas are also sleeping during the day, Asiatic Wild Asses and Nilgai wander across the salt flats from one patch of vegetation to another and, in winter, various raptors as well as the rare Macqueen’s Bustard also occur here. 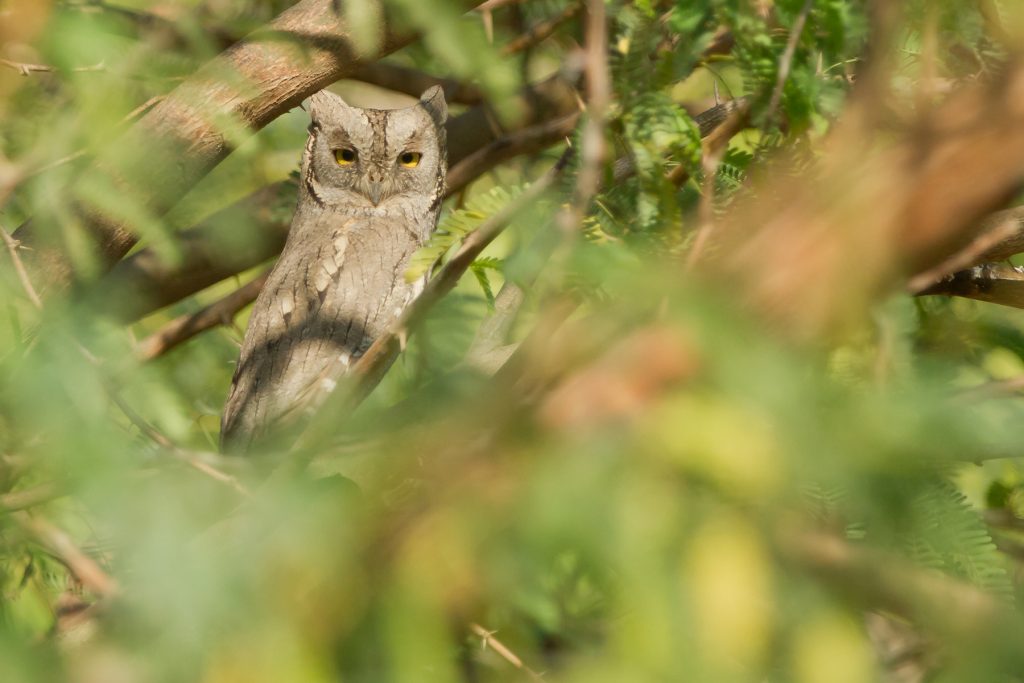 The lodge we stay at in the Little Rann is run by the wonderful Dhanraj Malik, who also runs a school and an orphanage, where children of the salt workers of the Little Rann, many of them girls, are looked after. It is a very tough life out on the salt pans! 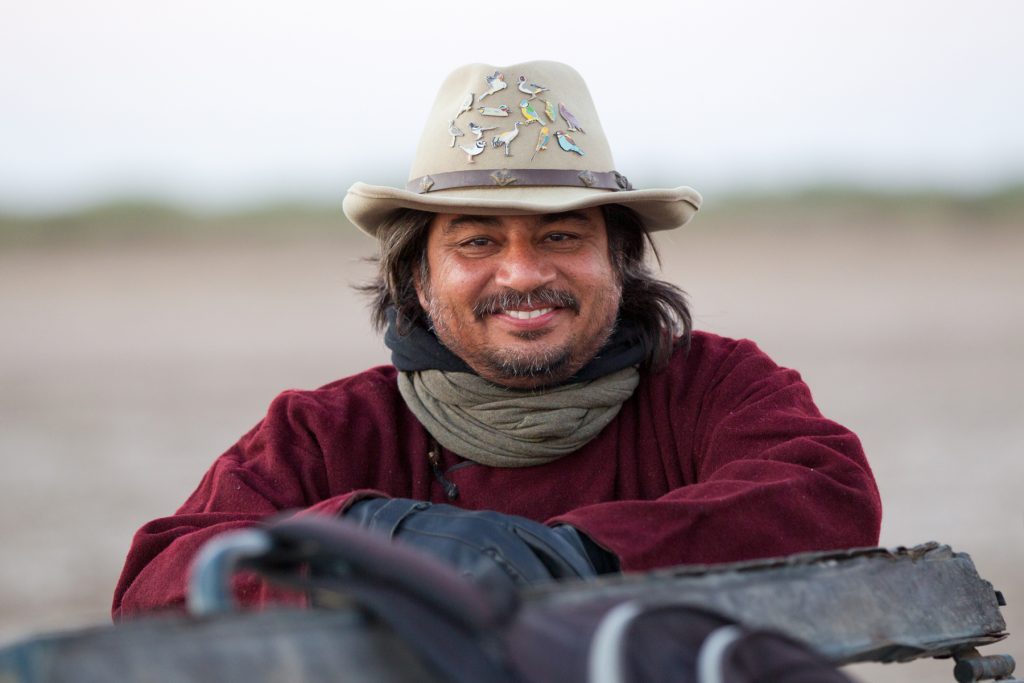 Dhanraj has a penchant for bird pin badges! (Image by Mike Watson) 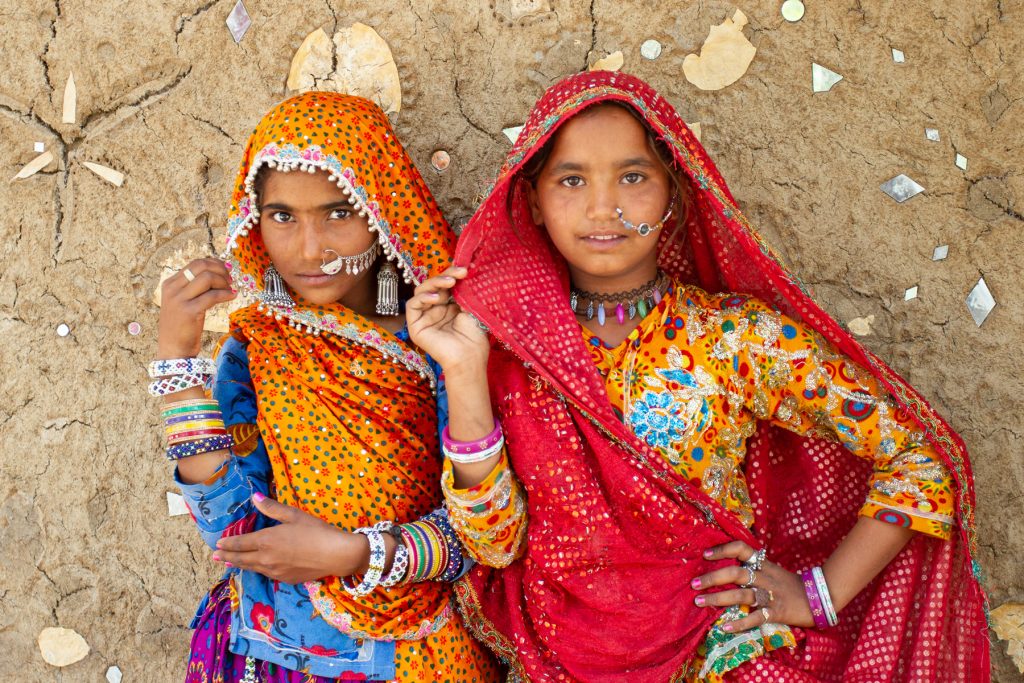 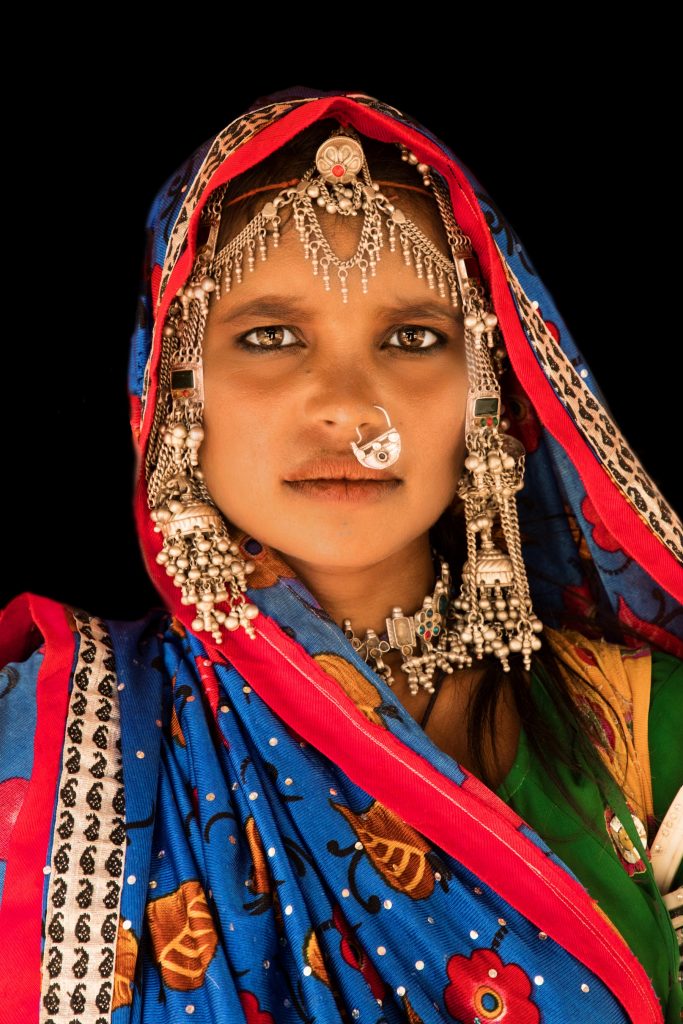 To the southeast of the Little Rann, Velavadar’s Blackbuck National Park is a wonderful remnant grassland not far from the shore of the Gulf of Cambay. Granted it is another national park, whose main attraction is its namesake but it is also another hyena hotspot. On our last visit, a mother Striped Hyena had taken over a fox’s den right next to one of the main rides in the park and was showing daily as she left it each morning. 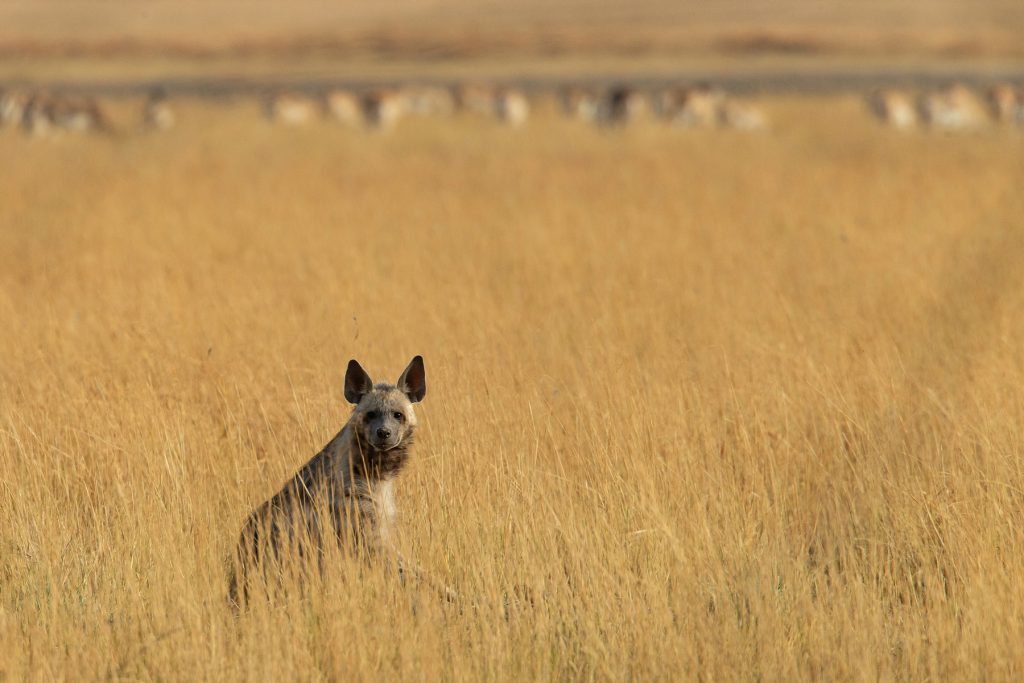 A Striped Hyena sits quietly in the grass of Velavadar, while herds of Blackbuck graze in the distance (Image by Mike Watson)

Her three pups were also to be seen every day, as they explored in the sea of grass in the vicinity of the den in the late afternoon. You could be forgiven for thinking our tour had turned into a ‘HyenaQuest’ and although they are usually nocturnal and more secretive, when they have large pups they seem to go a little bit crazy. 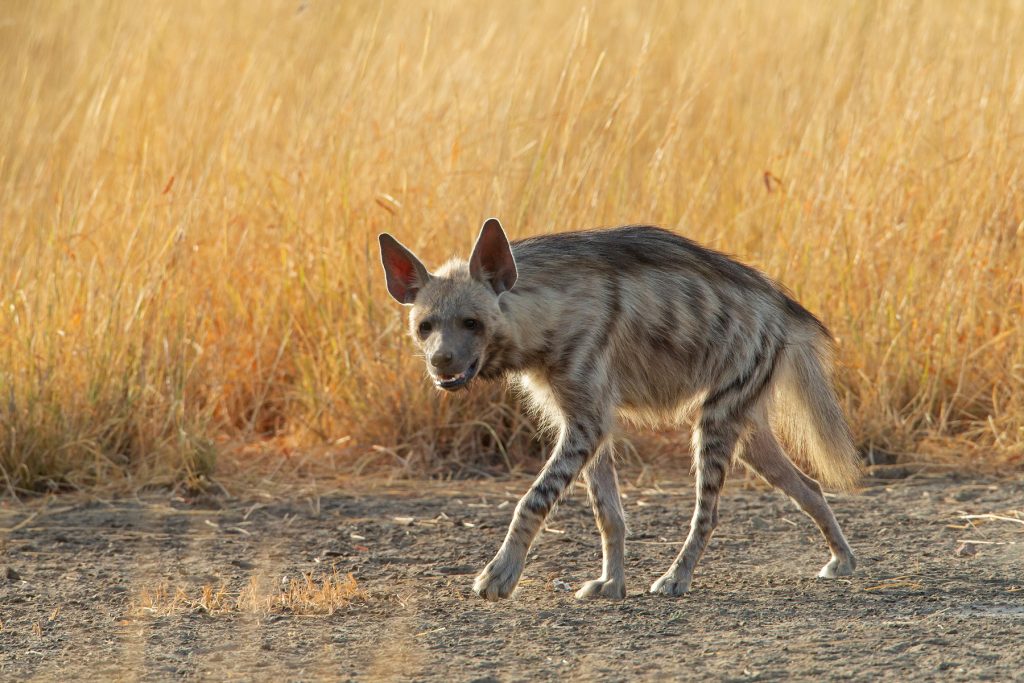 Each morning, mum could be seen lounging around the den as soon as the park opened. Maybe she did not fit into the old fox den anymore in addition to her three now fully grown pups? Once the sun had risen she would make her way off, each time crossing the jeep track just in front of our vehicles and then away into the grassland towards Bhavnagar. This show usually offered a superb opportunity to photograph her against a natural background and also against the light as well as with it! The pups were a little more nervous and would bolt back to the den before we got anywhere near them. On one occasion, she stupidly trotted out towards a pack of five wolves feeding on a Blackbuck kill, almost as if she hadn’t seen them? The wolves would only tolerate so much and two of them launched at her, the leader pursuing her almost back to her den. I think she was saved by the wolves’ reluctance to come too close to our vehicles? 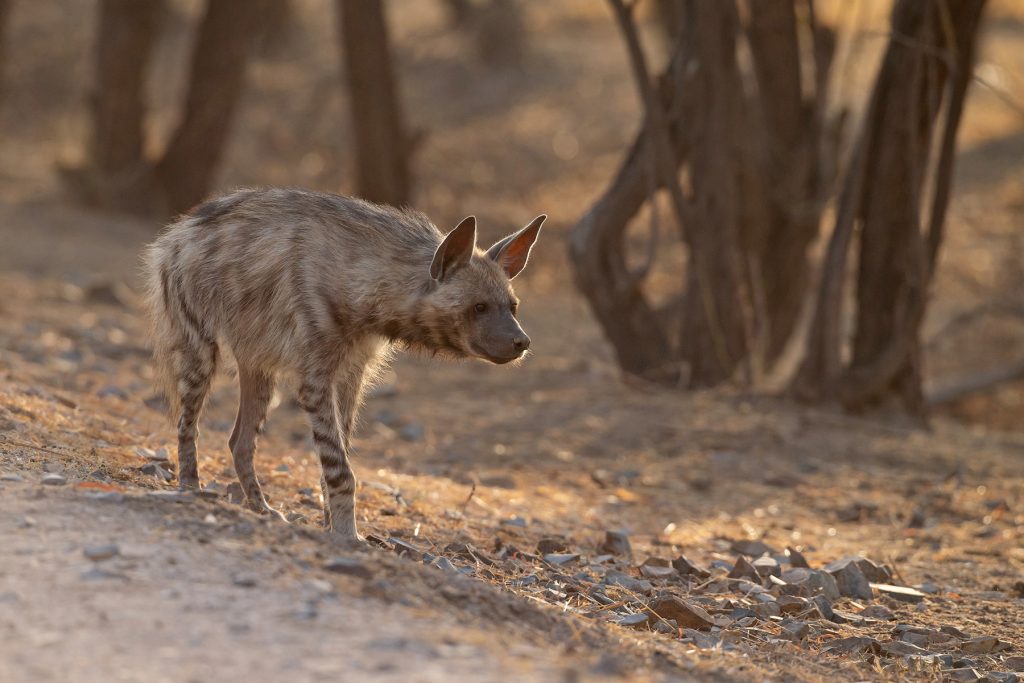 She pauses to check for danger, which we already know she wasn’t very good at! (Image by Mike Watson)

Striped Hyenas cannot be expected like this every time at Velavadar, but with the massive increase in Blackbuck numbers to over 4,000, the wolves are on the increase too and the hyenas clean up after them. So, there is plenty of food around at the moment. In fact, the wolves cannot keep up! A Leopard was seen last year within 2km of Blackbuck Lodge and of course the lions of Gir are not far away now too. I wonder how long it will be before another apex predator becomes established here? 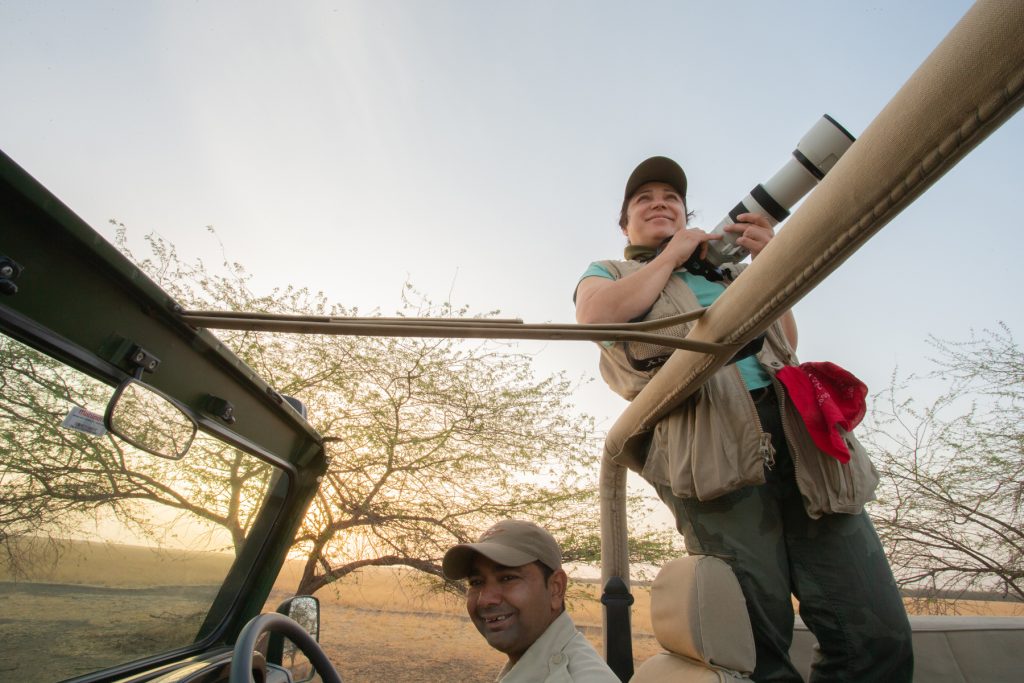 Naturally, we also see a lot of Blackbuck at Velavadar. Although we now have to drag ourselves away from the hyenas to take some photos of them! By the time the hyena pups are getting much bigger, the winter gathering of harriers for which Velavadar is also famous has usually dispersed but there are always some interesting birds around and Mickey Desai’s Blackbuck Lodge, where everyone stays here, is one of the best (if not the best) wildlife lodges in all of India. It has featured in all sorts of magazines like Condé Nast Traveller and has won more awards than you can wave a stick at. The food here is really terrific and there is nothing like taking a shower under the stars in your own private bungalow courtyard with a wolf howling in the distance, as happens from time to time! 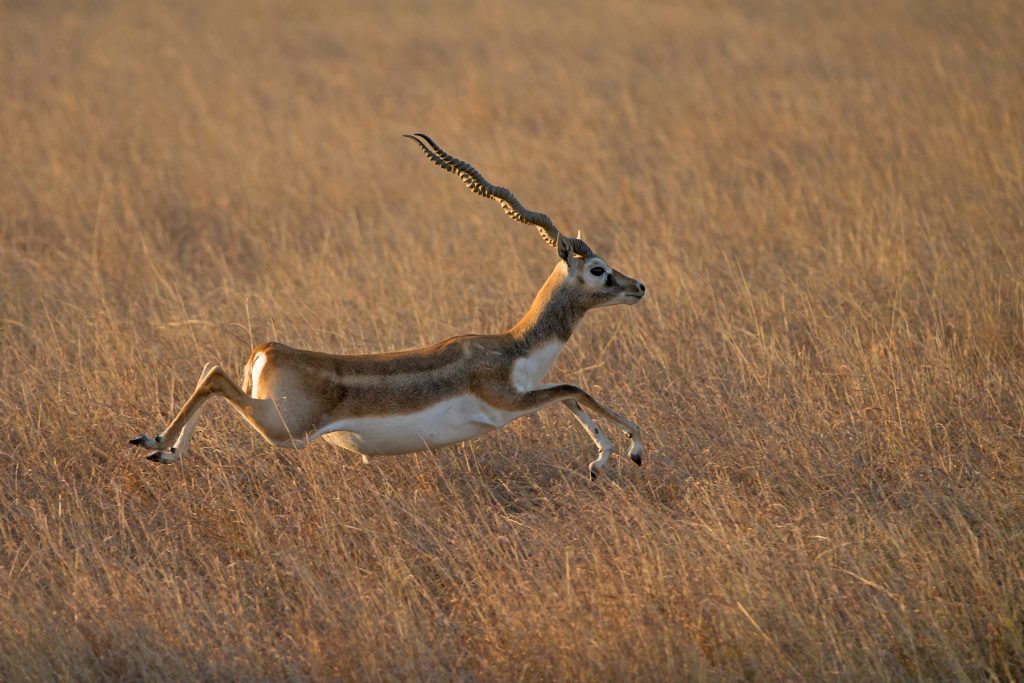 A super elegant Blackbuck in full flight at Velavadar. Not all adult males turn black. (Image by Mike Watson) 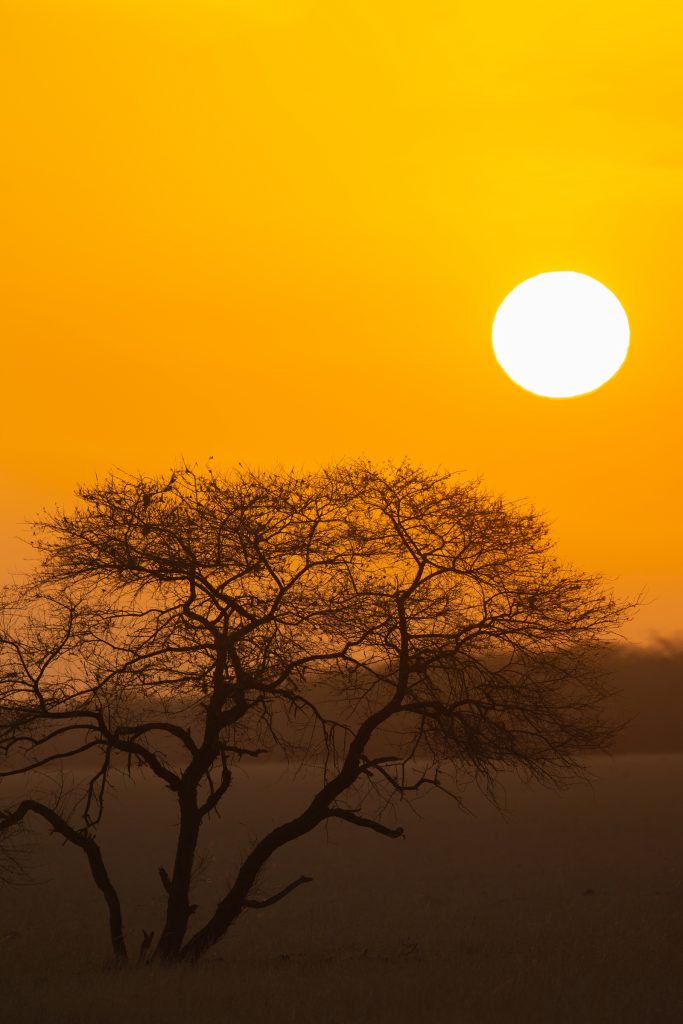