A Tale of Three Tigresses – Sonam

“NOW this is the Law of the Jungle — as old and as true as the sky;

Wash daily from nose-tip to tail-tip; drink deeply, but never too deep;

And remember the night is for hunting, and forget not the day is for sleep.

The Jackal may follow the Tiger, but, Cub, when thy whiskers are grown,

Remember the Wolf is a Hunter — go forth and get food of thine own.

Keep peace withe Lords of the Jungle — the Tiger, the Panther, and Bear.

And trouble not Hathi the Silent, and mock not the Boar in his lair.

When Pack meets with Pack in the Jungle, and neither will go from the trail,

Lie down till the leaders have spoken — it may be fair words shall prevail.

It’s hard to imagine a more fairy tale like setting for a wild tiger than the jungles of India. Deep in the woodlands of Tadoba Andhari Reserve in the Indian state of Maharashtra, a safari looking for tigers is like the famous Jungle Book writ large. 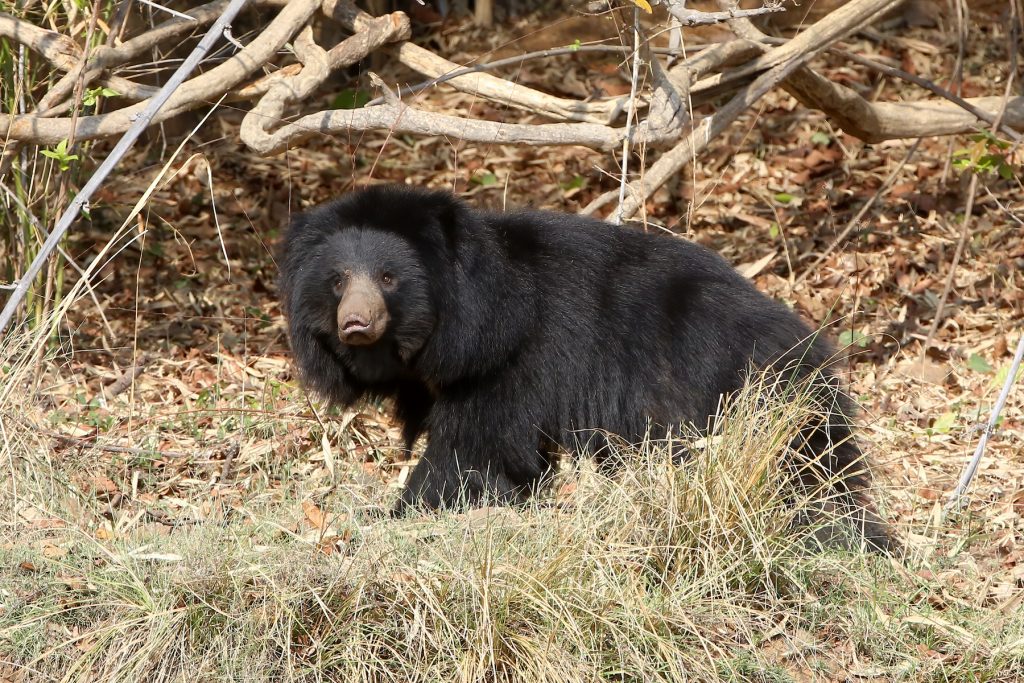 We had found a spot in the shade of giant teak wood trees at a small but pretty lake. 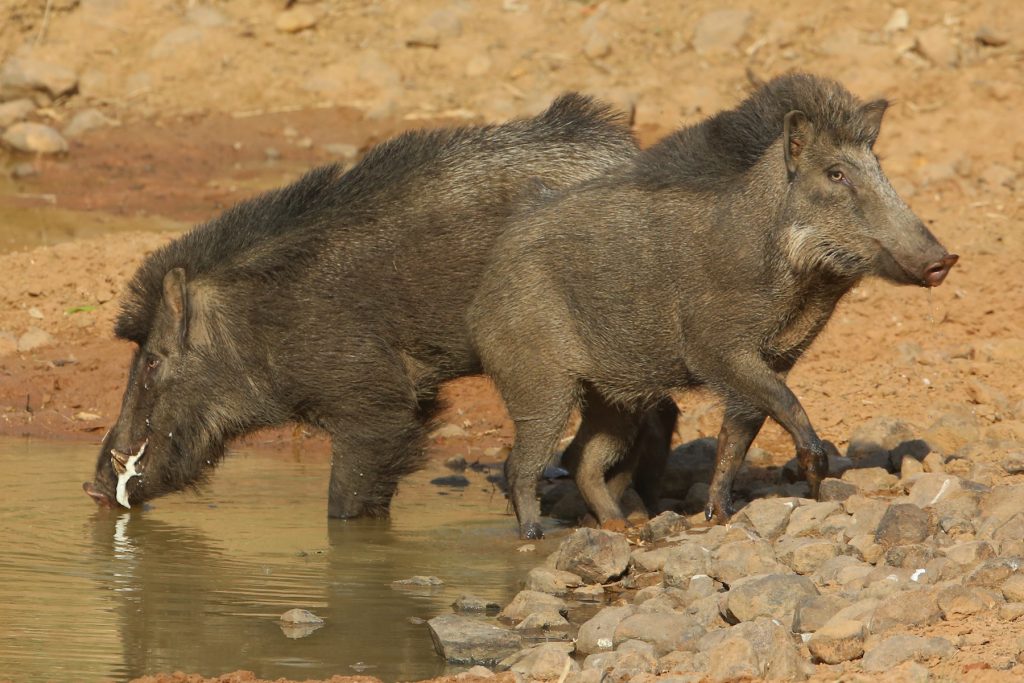 We were searching for Sonam, one of the tigresses that featured in the BBC documentary “The Tiger Sisters of Telia” and one of Tadoba’s best known and loved female tigers. 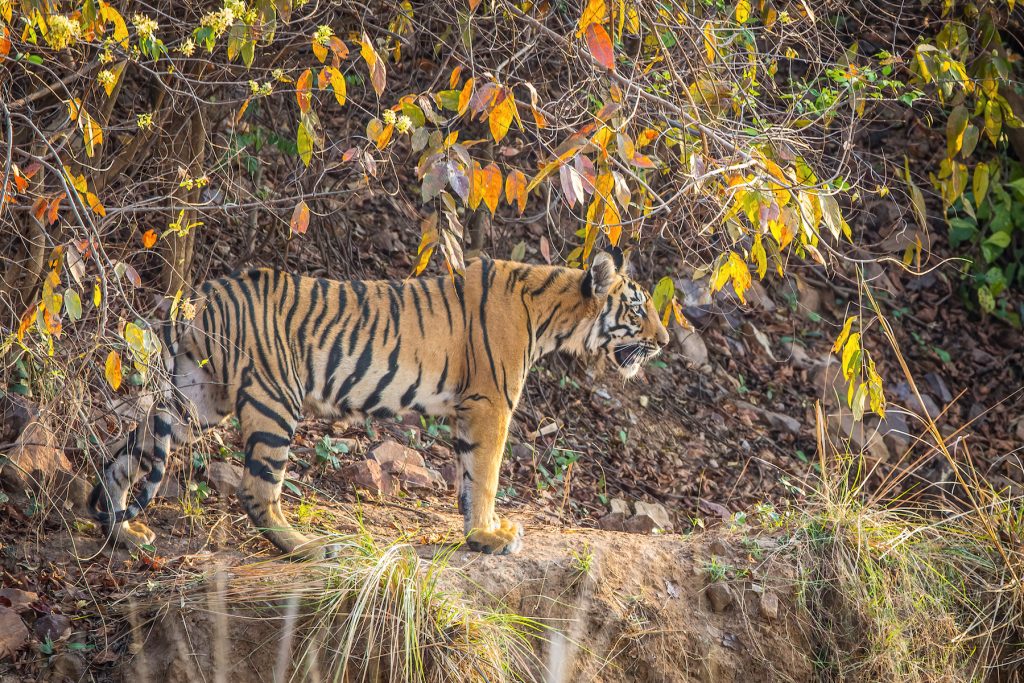 Sitting next to her water hole the forests of India unfold before your eyes and the characters of the Jungle Book come to life. 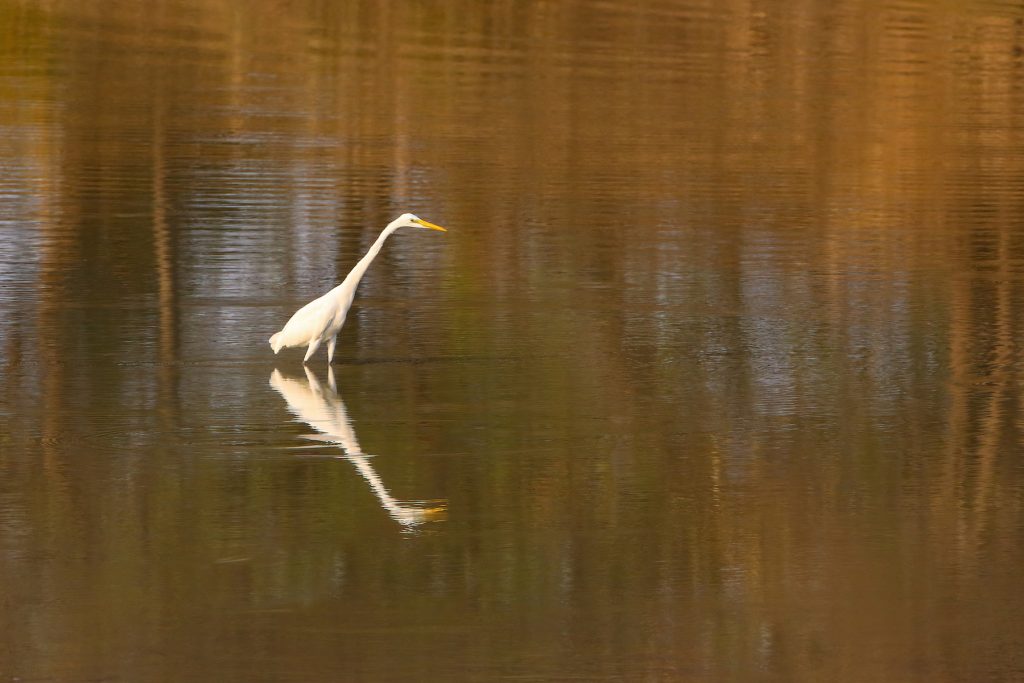 It is possible to watch troupes of Grey Langurs swinging from the branches of trees like a crazy Bandar-log or spot a shy Sloth Bear sauntering down to the water to take a drink as Baloo. 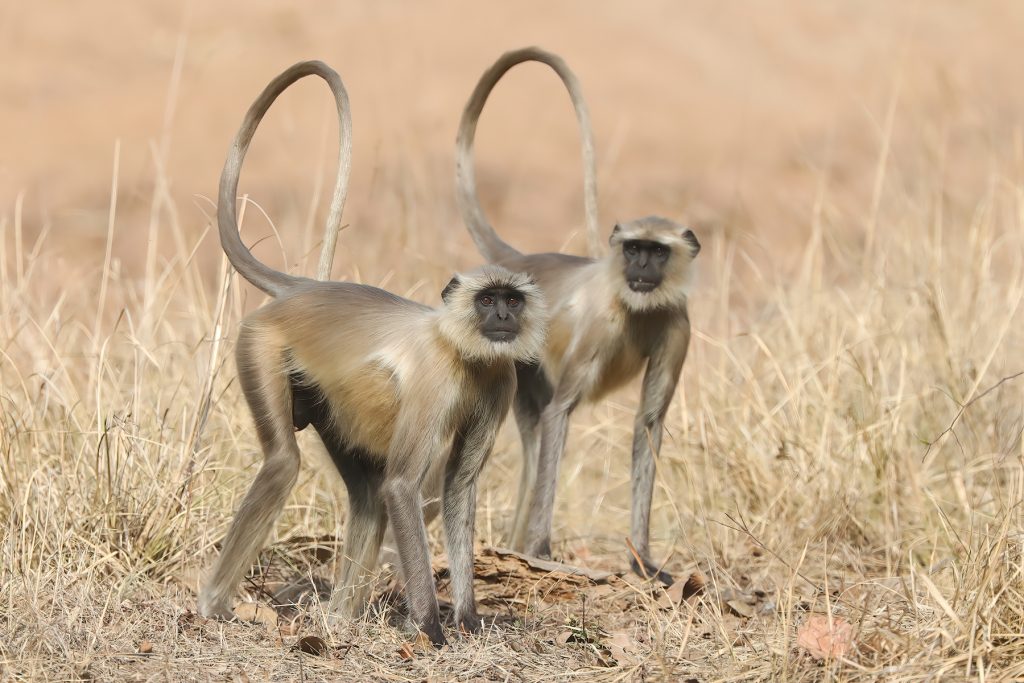 The Bandar Log of Langurs! (image by Inger Vandyke)

As you wait, you might hear a rustle of leaves as a Bengal Monitor wanders by, searching for its next meal in the leaf litter or the calls of another Jungle Book character, Mao the Peacock, echoing through the forest. Joining the forest chorus are pretty Jerdon’s Leafbirds, Rufous Treepies and the haunting calls of the Grey Junglefowl. 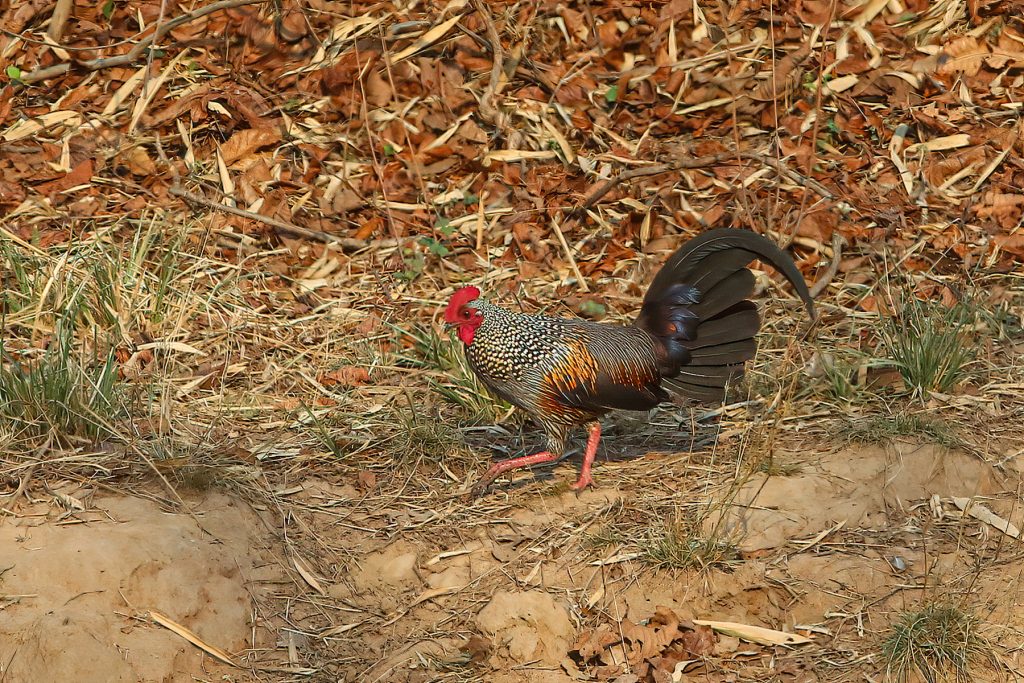 If you sit quietly, you might spot shy animals like Muntjac, or Barking Deer, choose a quiet moment after sunrise to drink. 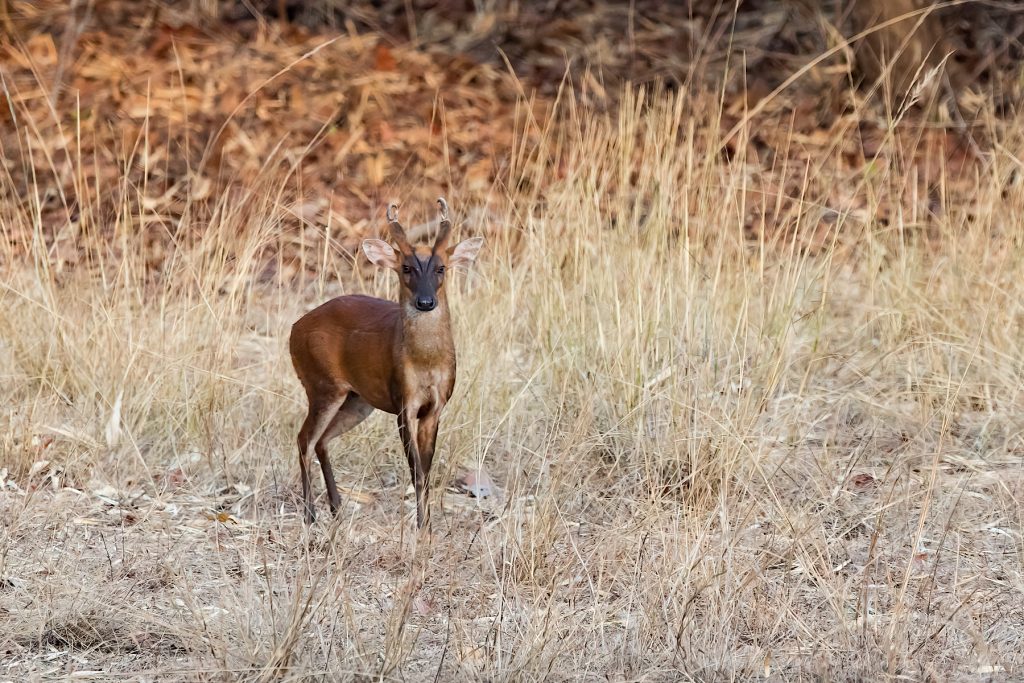 They politely step aside to allow skittish Chital, or Spotted Deer, to quench their thirst or water loving Sambhar Deer wading through the shallows searching for aquatic vegetation to eat. 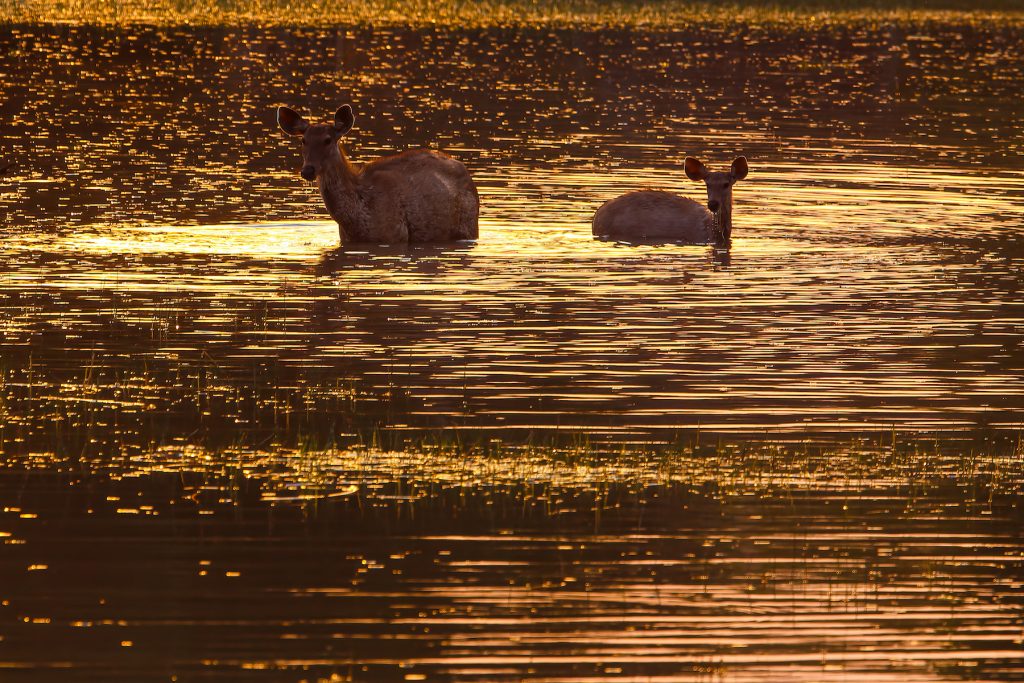 On one of our tours here we’ve even witnessed a cheeky Sloth Bear taking a bath at this water hole. I mean, why just settle for a drink when you can dive in and cool off? 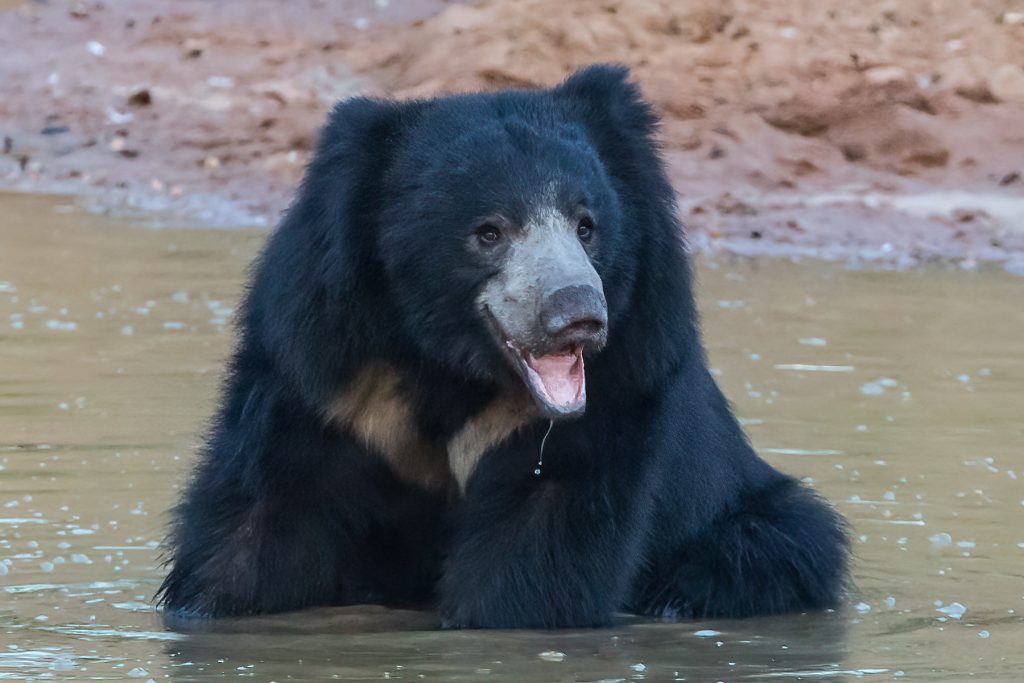 “I lost my soap!” a Sloth Bear takes a swim in Sonam’s water hole (image by Inger Vandyke)

While all of these creatures are a wonderful distraction, we really came here to meet Sonam, a tigress whose roots lie in the Tiger royalty of Tadoba. Her father is Wagdoh and her mother is the former tiger queen of Tadhoba, Madhuri. Wagdoh weighs in at around 240 kilograms and he is living out his elderly years in one of Tadoba’s buffer zones. Wagdoh is the Shere Khan of our safari and we met him before we managed to spot Sonam. A gigantic, ferocious tiger whose battle scars with other males and a ratty eye from a poorly healed injury as he brought down a Gaur (Indian Buffalo). These days he is often looking after cubs and in an unusual act for many tigers, is actually brought food by female tigers in exchange for child care. 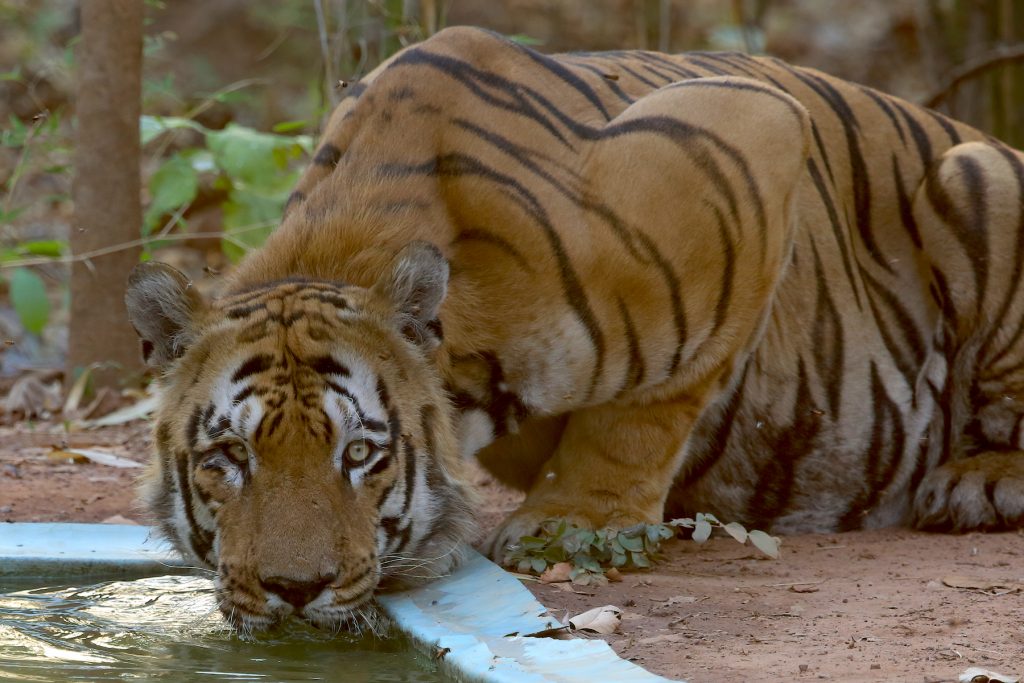 The grandfather of many of Tadoba’s most regal tigers, Wagdoh. Sadly his only drinking pool was lined with plastic but he is probably the rattiest, most loved tiger in the entire reserve (image by Inger Vandyke)

Sonam was a part of a litter of four cubs when she was born with Mona, Geeta and Lara being the other three. Together they were called “Telia Sisters”. These four sisters were Madhuri’s (one of the successful mother tigresses of Tadoba) second litter. Her first litter was fathered by another tiger and her cubs were killed by Wagdoh so that he could mate with Madhuri. Such is the law of the jungle in Tadoba. 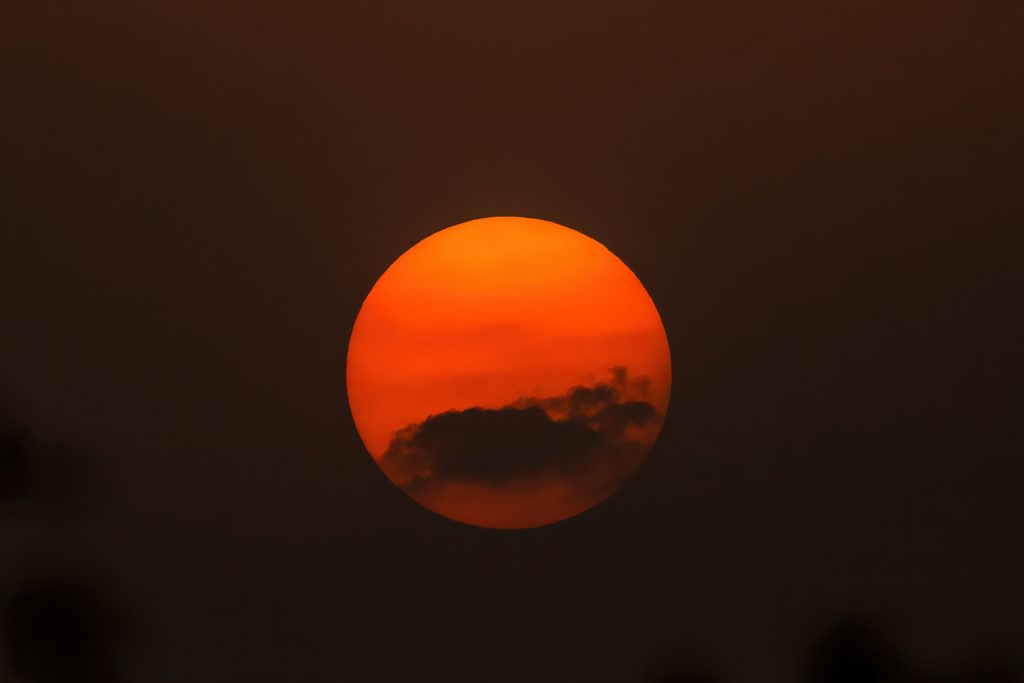 Our first encounter with them was just before a magnificent sunset.  The cubs were hidden deep in the bushes and Sonam was asleep in the shade beside them. We could barely get a glimpse of them, they were so deeply buried in the shrubs. At one point we saw one of her cubs jump up in surprise when they heard the shrieks of langurs from the tree tops and we watched the cub through the long grasses, looking longingly at the langur, wanting to play with it. Like any kitten it was completely enthralled with this langur, trying to watch where it was going and the cub’s tail wagged wildly in excitement. It really wanted that langur to come down and play! It was such a shame in many ways that none of this was easily photographed. It all transpired in such thick vegetation.

When Sonam finally emerged with her cubs to drink she brought them out in clear view and the sight of three tigers drinking side by side from a pool literally took our breath away! 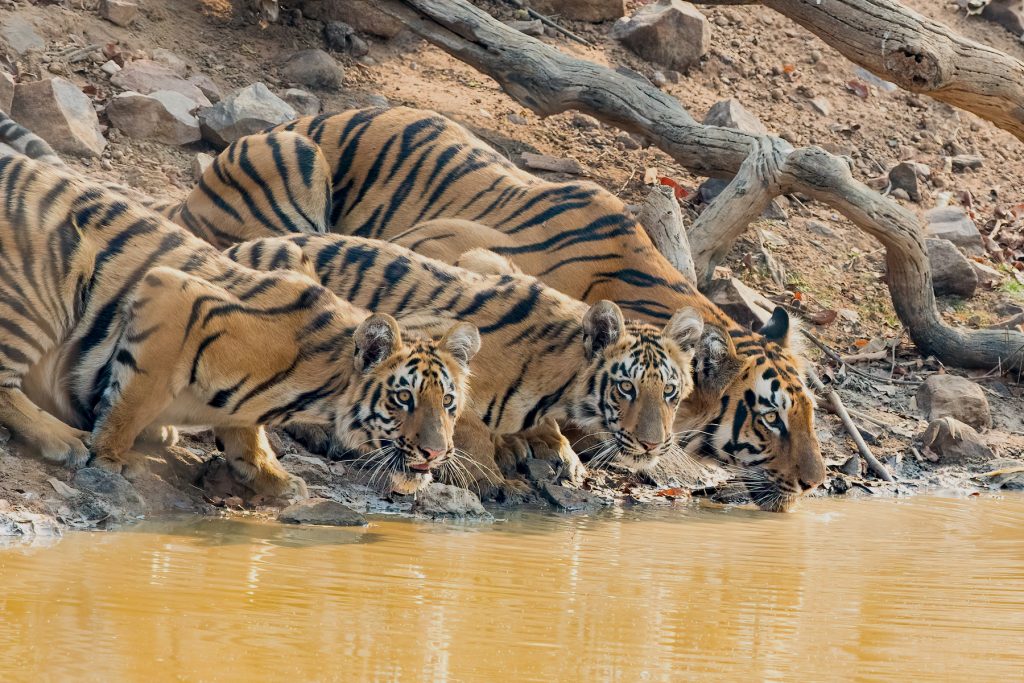 The last time we saw Sonam that trip, she was on her own. After a lazy drink from the water hole, we watched in awe as she simply sat in the pool to cool off. When she had finished she walked out of the pool towards us and then up the valley that led to her pool. I was in a jeep at the back of the assembled safari cars. 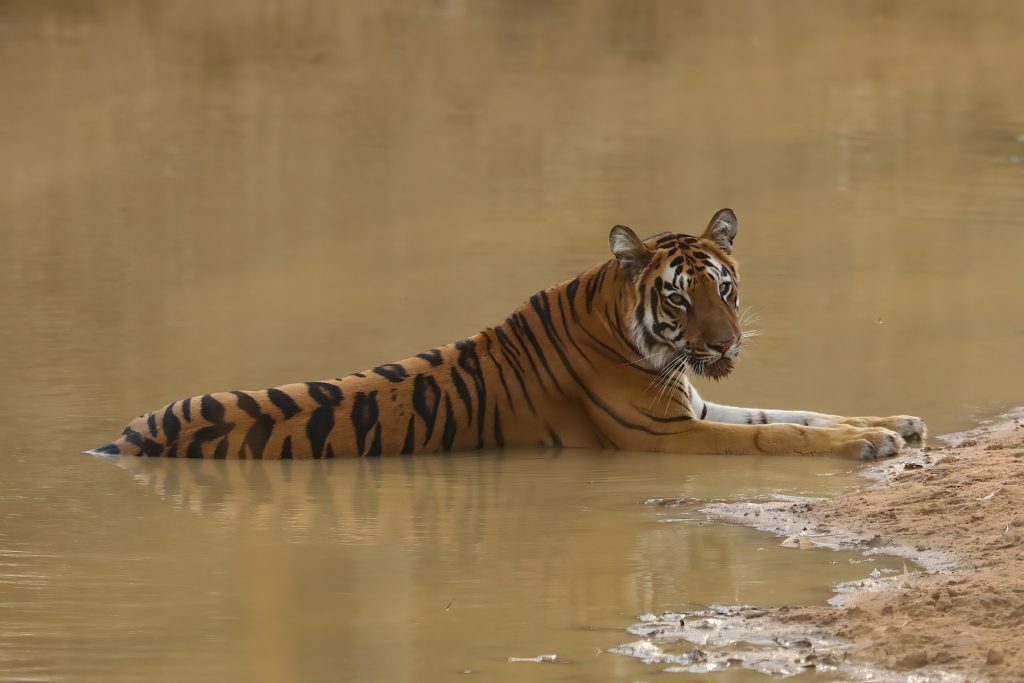 In the pre-monsoon heat of Maharashtra, tigress Sonam likes to bathe (image by Inger Vandyke)

“Back! Go back! She’s on the move and we need to follow her!” I remember telling my driver. We moved with stealth in order to see her and my only guest (all of the others had shifted into other cars to get a better view of Sonam taking her bath) and I stopped to give her some space to cross the road. To our delight she crossed right at the back of our jeep! She was so close we felt like we could almost touch her! Quietly she disappeared into a bamboo thicket where we lost her in a sea of stripes like a mirage….. 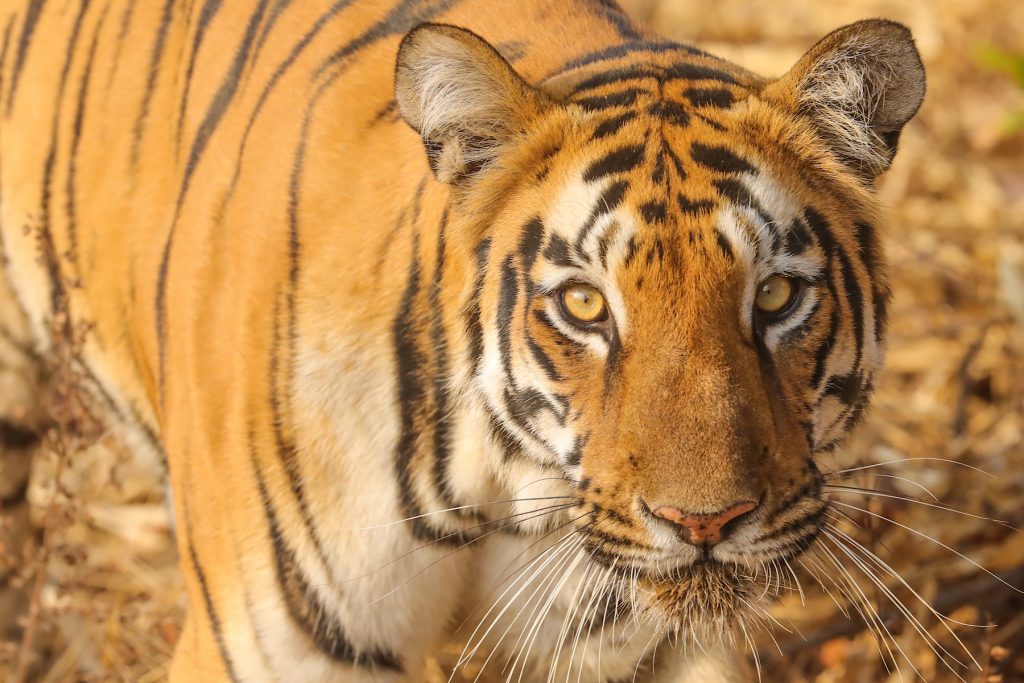