Running Towards the Rains 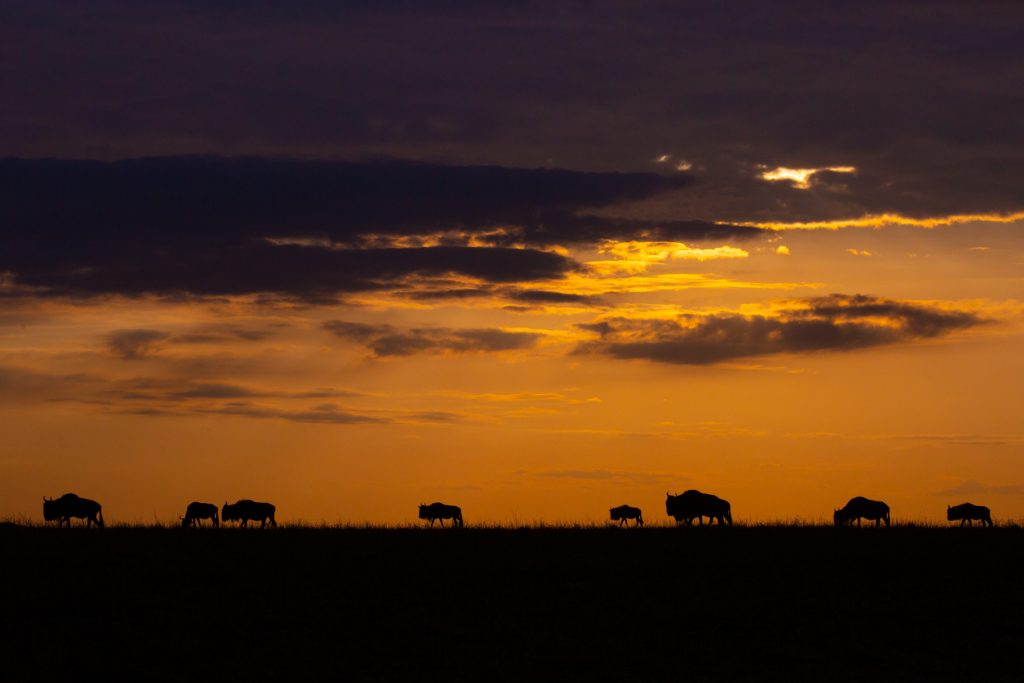 It has been described as ‘The Greatest Show on Earth’ but, to me anyway, the word ‘show’ implies that the annual migration of Blue Wildebeest across the Mara Serengeti ecosystem is somehow put on, that it is staged. In 2020 I experienced my first trip to witness this spectacle, this epic movement of animals in a vast wilderness, this endless cycle of life that represents the last great migration of any mammal on earth. 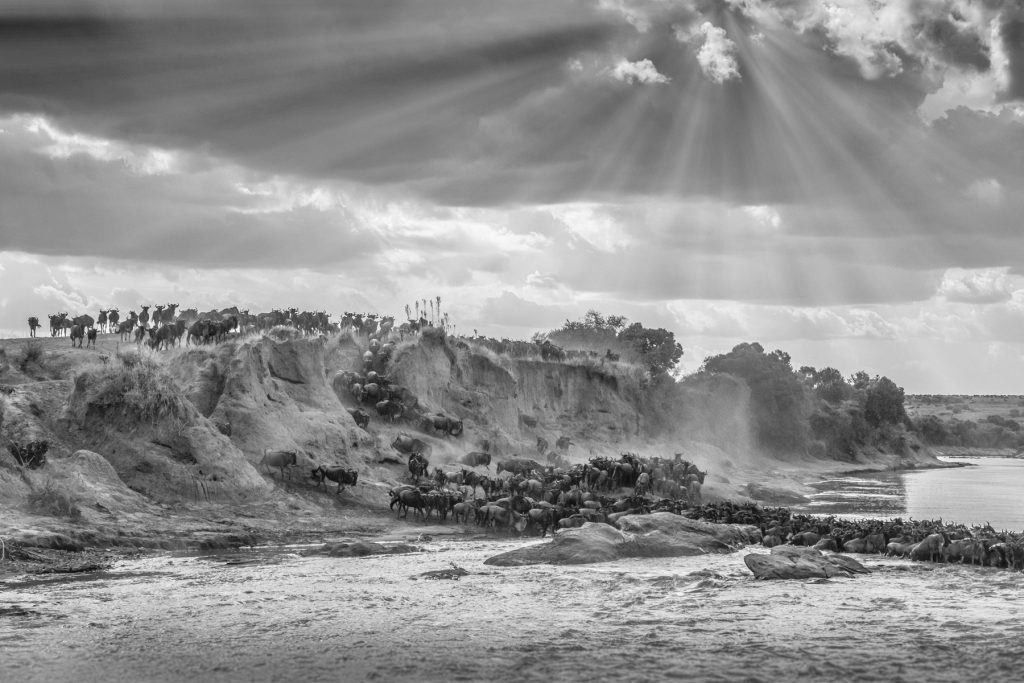 An Epic Saga of Life and Death

Around two million animals including Blue Wildebeest, Plains Zebras and Gazelles make the almost 800 kilometre, annual clockwise journey around the Serengeti and Masai Mara ecosystems to gain access to water and grazing areas on migration. 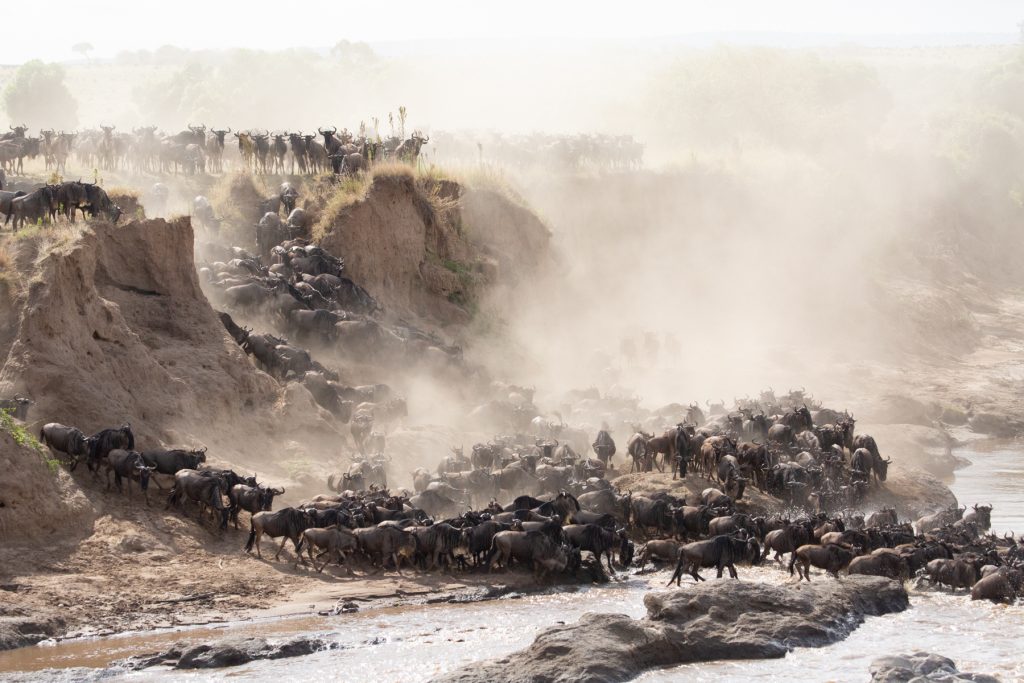 When the rains beckon, the wildebeest go. In spite of the big cats in waiting, or the rivers thick with crocodiles, they diligently follow their inner compass in a never-ending circular journey.

Joining them are throngs of Plains Zebras and both of these animals drift harmoniously around the migration route, as zebras and wildebeest will eat different parts of the same plants to sustain themselves.

Trailing such a huge movement of animals around the migration are predators like lions, leopards, cheetah and hyenas but the dangers don’t end with terrestrial predation. The gargantuan river crossings required to complete the migration are also fraught with difficulty including predatory crocodiles, steep cliffs, slippery rocks and the ever present need to dodge hippos lounging in the waters that feed the migration route, giving it life. 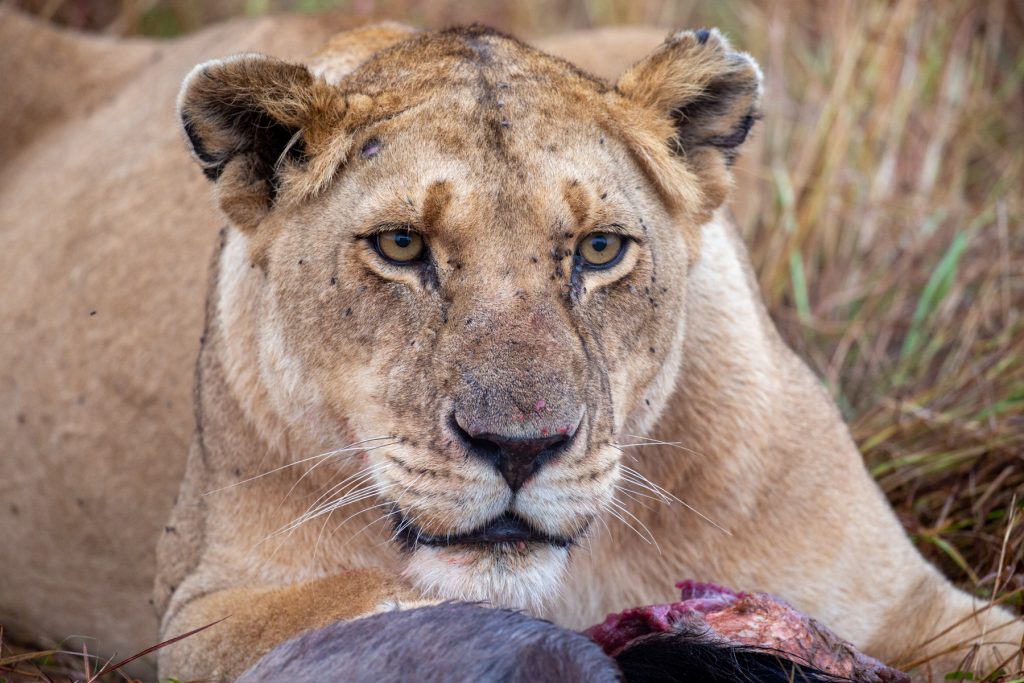 On the move, researchers have developed a term called ‘swarm intelligence’ where the wildebeest systematically explore and overcome an obstacle as one. Because wildebeest have no natural leader, the migrating herd often splits up into smaller herds that circle the main mega-herd in different directions. Together, these herds can sometimes cover an entire half of the Serengeti alone. 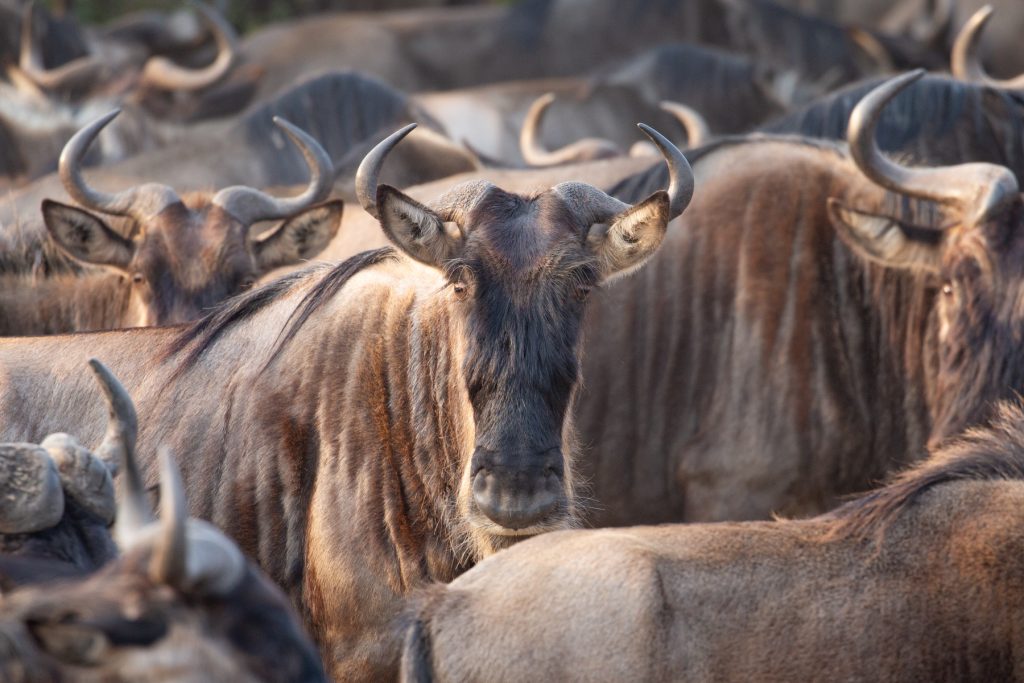 Looking at this mass of creatures it sometimes feel a bit chaotic with different animals seemingly heading off and leading sub-herds away from the path of the rest, but generally the wildebeest herds move in the same direction, up from the south of the Serengeti, through the Ngorongoro Conservation Area, the Loliondo Game Controlled Area, and the Grumeti Reserve. They then leave Tanzania briefly to spend time in the Maasai Mara in Kenya, which borders Serengeti National Park to the north, before heading back south to start the journey again. 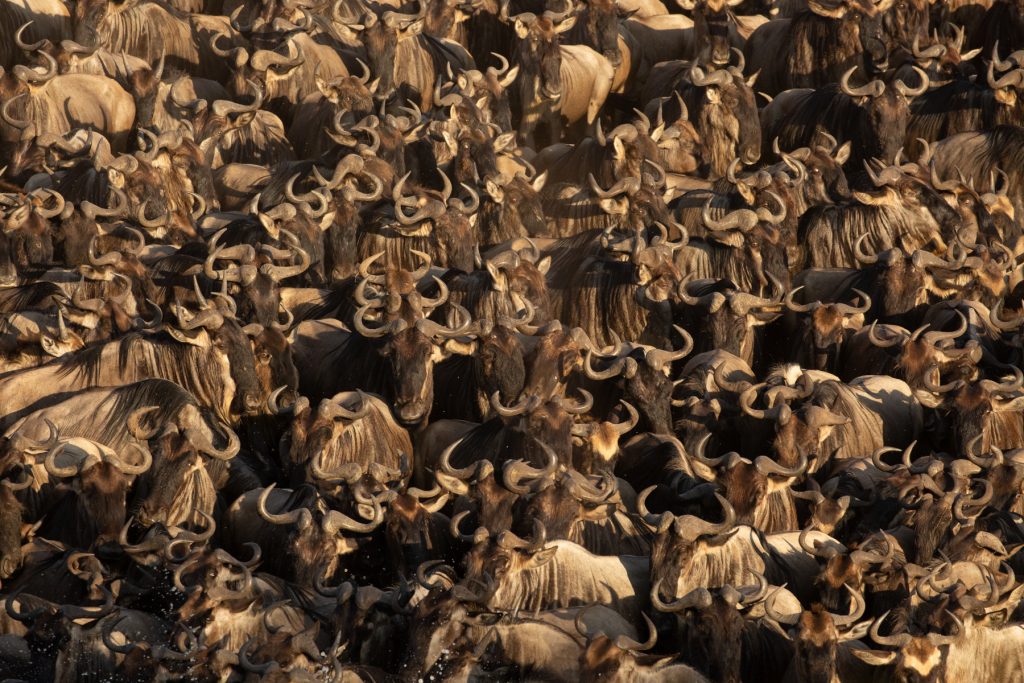 A Frenzy of Life

The river crossings are the scenes we’ve all watched on Planet Earth – the chaotic clamber of wildebeests, zebras and a few antelope species across turbulent, crocodile-infested waters. And then, of course, you have the lions and leopards waiting amongst the riverine shrubs to ambush unsuspecting victims.

It doesn’t matter how many nature documentaries you watch, nothing really prepares you for the spectacle of a crossing. 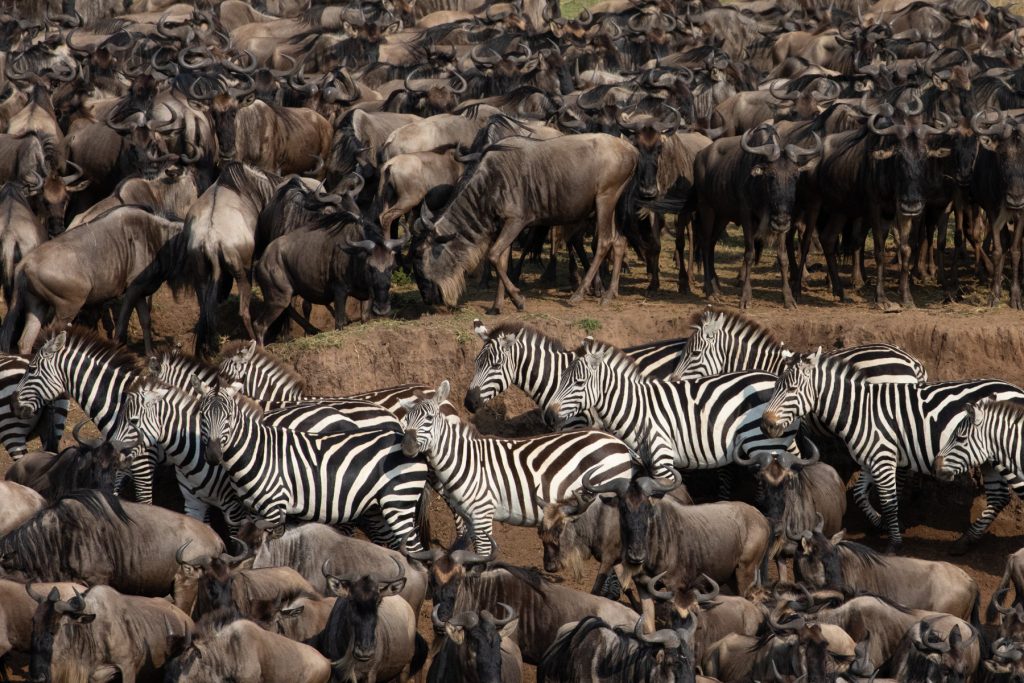 Watching the sheer number of animals gather, waiting endlessly for the time that they move towards the cliffs then move away after seemingly changing their mind, then finally watching the first few animals tentatively making their way down a mud cliff or bank as the leaders of the crossing. It is when you see those leaders, you know it is going to be ‘on’. It is these leaders that trigger the excitement of the herd to move and even in the far distance, animals can sense that they need to cross and they run down to the river in great throngs to join in. Sometimes the sheer numbers of animals gathering on the steep edges of the river actually makes some of the wildebeest fall off cliffs by accident, an event that can sometimes lead to catastrophic injuries like broken legs and necks, leaving these poor injured creatures to become prey for prowling lions and hyenas, and that is before some of them even make it to the water. 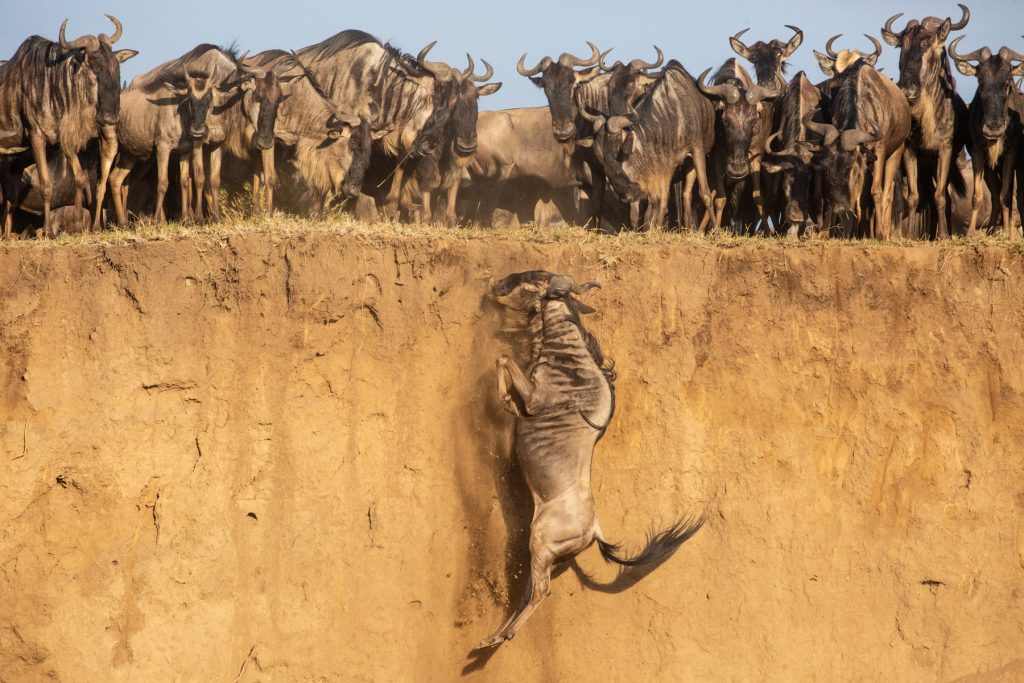 A wildebeest falls off a cliff by accident, succumbing to the backward pressure of the herd (Image by Inger Vandyke)

The river foams with life as the migrating wildebeest whip its normal inhabitants into a frenzy. Hippopotamus make way, water birds take flight, tiny swallows circle the heads of swimming creatures and the ever present crocodiles assemble, trying to work out which animal might be the right one to choose for dinner. The swim is often through deep water and exhausting, leaving the young and the tired vulnerable to predation. 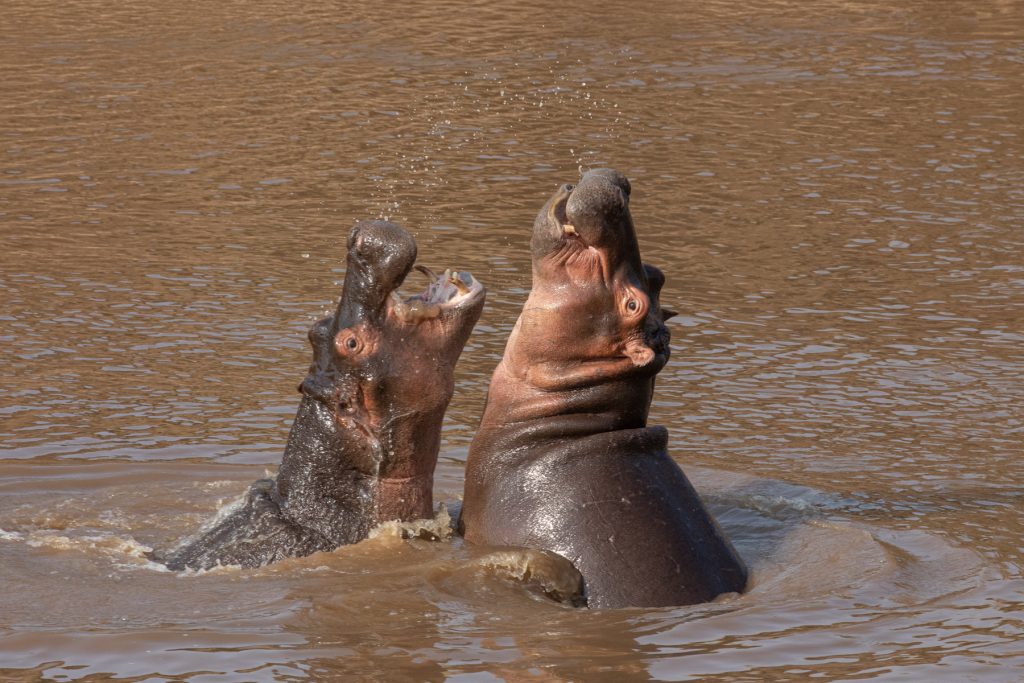 Agitated by the tense atmosphere of the river during crossing season, two Hippopotamus engage in a fight (Image by Inger Vandyke)

River crossings are certainly not for the unfit or faint of heart. Quite often you hear about them potentially starting while you are out looking at, and photographing, other things. When news of a crossing gets out across the bush telegraph of Mara guides, the race towards them can mean a bumpy ride at speed so as not to miss it. On arrival one needs to jostle with other safari vehicles to get the best vantage point and then the wait begins. 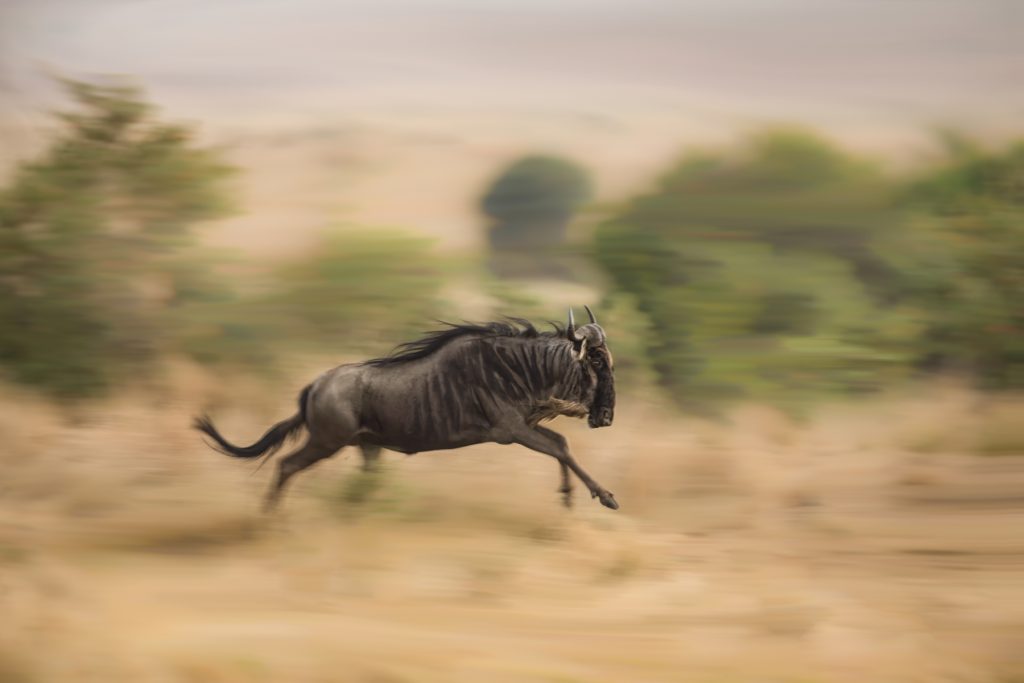 When the crossing starts it is almost like an adrenaline rush kicks in and it’s difficult to know what to photograph first. 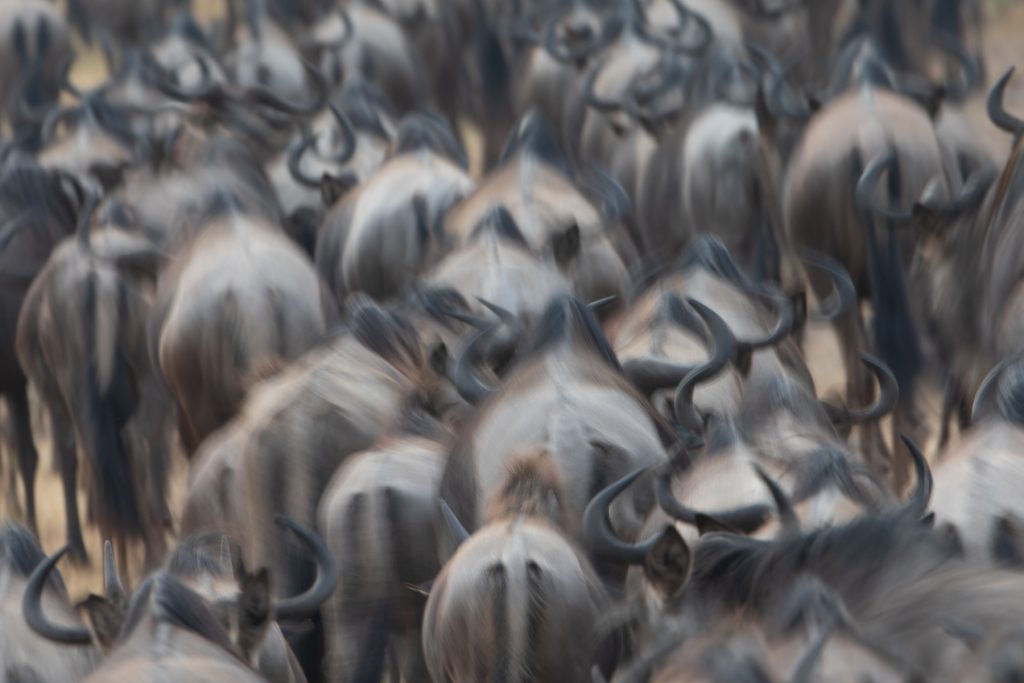 Motion blur of wildebeest horns during a crossing (Image by Inger Vandyke)While a crossing takes place the sheer frenzy of activity makes the time pass quickly. It often feels they are much shorter than they actually are.

During any photography tour it is impossible to predict just how many crossings might occur. It is for this reason that travelling with a seasoned professional photographer is a real advantage. If you only get to see a couple of crossings then missing some aspects of them is quite easy. I remember my first crossing on the day we arrived at Entim. It happened right at our camp. I got so caught up with the visual spectacle of it that I really didn’t know what to think at first. Do I run and get the herd crossing? Individuals jumping over their peers to reach the river? Water splashes? Predation? How about the sheer numbers of animals leaving the river to graze on the opposite side? It can all feel a bit overwhelming to the uninitiated and I was happy my guide was on hand to remind me of what was possible, when my mind got lost in the melee. 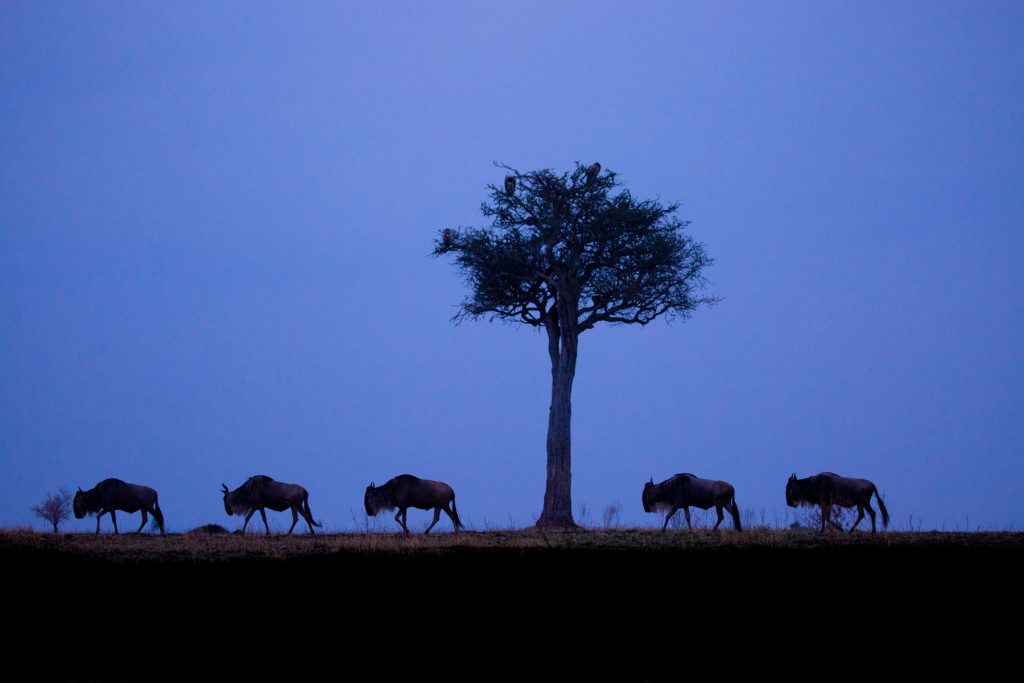 On the 2020 Wild Images trip we were lucky enough to see twelve crossings of the Mara River and they varied in length and quality of photos depending on where the animals crossed, at what time of day and the number of animals assembled. On crossings where the light wasn’t conducive to good  photos it was nice to simply put our cameras down and watch a crossing. The crossings are, after all, a spectacle whichever way you see them.

Curiously once a crossing has finished, it takes the animals living near the river quite some time to settle down. After the thousands of hooves have finished stirring up the waters, hippos return to their quiet pools to sleep; crocodiles pull any of their prey into deeper water to keep it for later dining and water birds return to the shores to feed. A couple of hours after one crossing I even noticed a tiny dark creature moving across the lawns of our camp. I went over to it and found a baby Grass Rat, still blind from birth, edging its way towards the restaurant. Obviously the migration crossing we’d witnessed stirred up a grass rat nest and sent the tiny babies scattering. We picked it up and returned it to the relative safety of the nearby long grass in the vain hope we were helping it to survive. 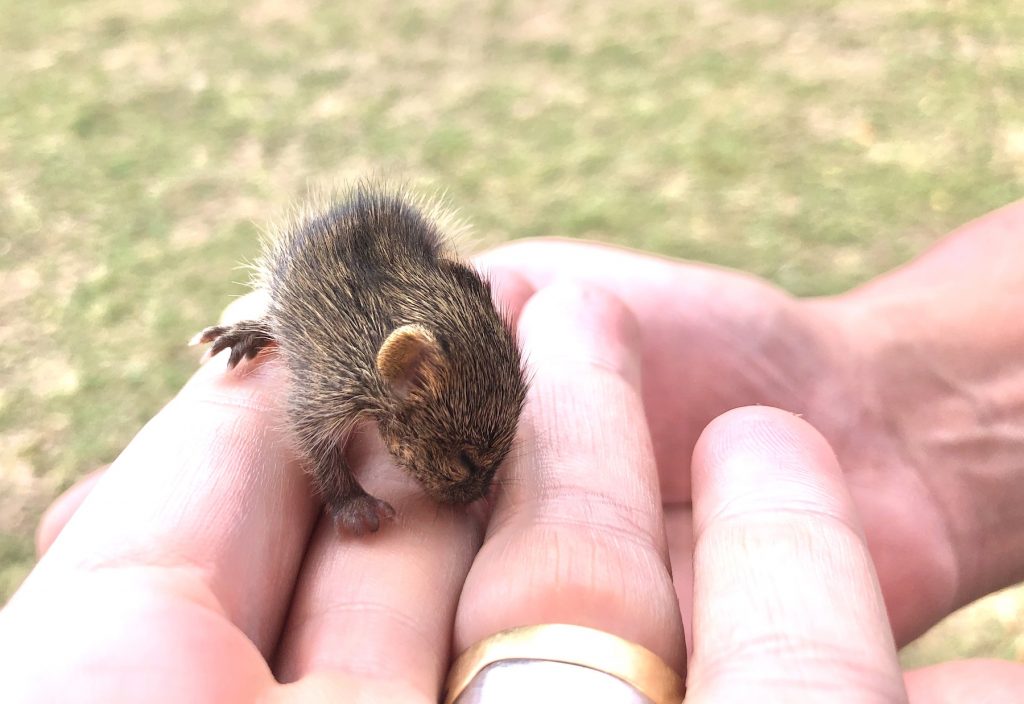 The Confrontation of Injury and Death

As a seasoned conservation photographer of over two decades I’ve witnessed a lot of natural attrition in my life from the death of baby seabirds in large colonies, to the predation of Humpback whale babies underwater or the death of seals at the mouths of hyenas in Africa. Even after seeing all of this, I have to admit I wasn’t really emotionally prepared for the drama of the migration. 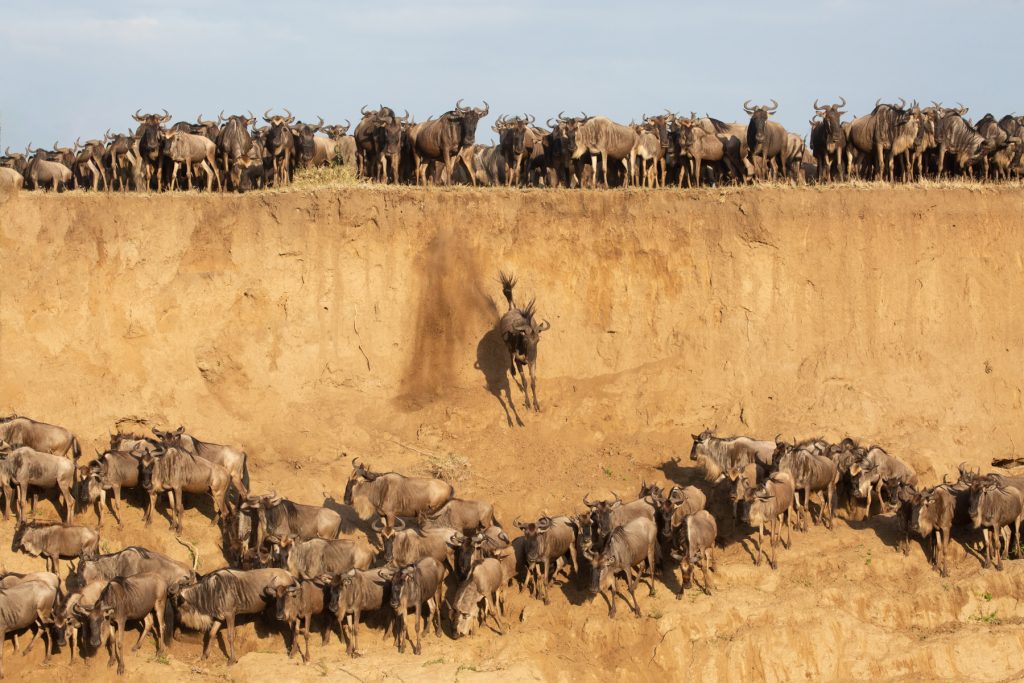 These river crossings are certainly not for squeamish or emotional observers. Every river crossing involves either injury, or death, or both. At times I found myself cheering on single animals crossing safely then looking away as I saw a baby wildebeest be taken by a crocodile. Sometimes we saw animals with broken legs who were simply not going to survive. Others broke their necks falling off cliffs. 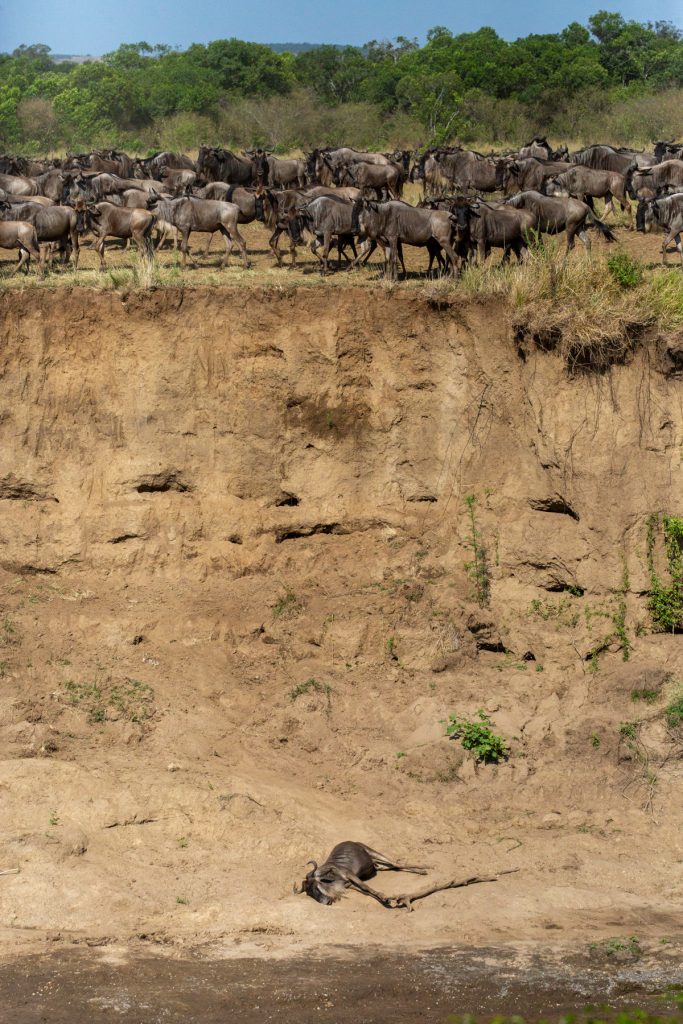 Sadly not all migrating wildebeest make it (Image by Inger Vandyke)

Then, of course, came the predation of the weak, injured or young animals by crocodiles, hyenas, lions and leopards. Finally the scavengers like vultures, hyenas and jackals moved in to clean up what was left by the carcasses on land. Marabou storks, crocodiles and even Hammerkops cleaned up carcasses in, or on the side of, the river. 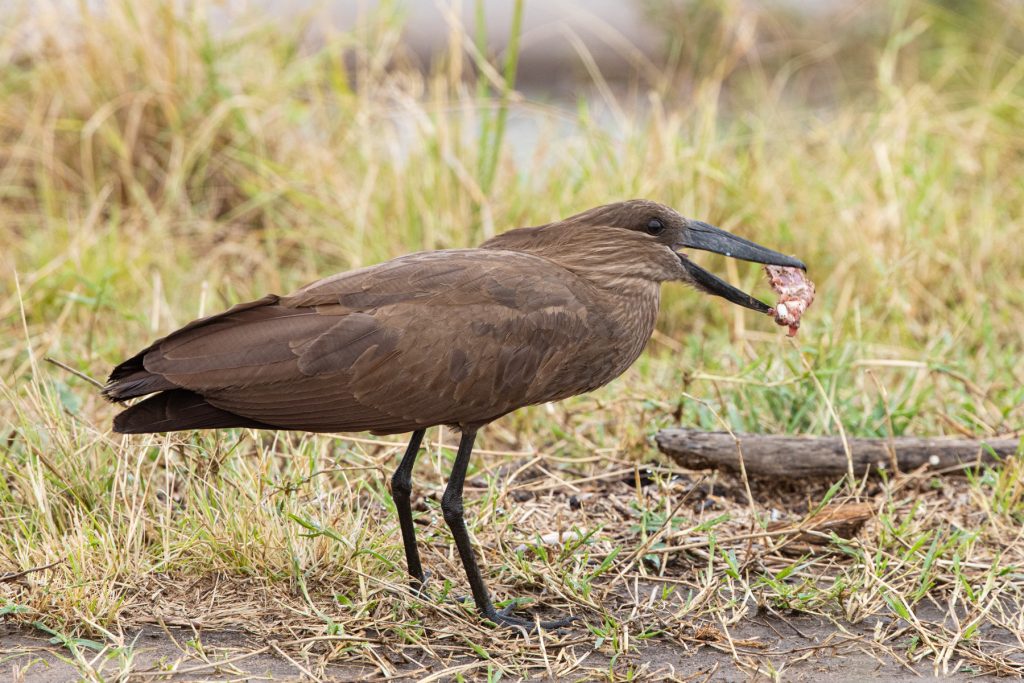 If you are fascinated by the cycle of life and you want to witness this first hand, then there are few acts in the world that rival the Mara crossings. If you find these safaris might cause you to have a sleepless night, then watching or photographing them is perhaps not for you. 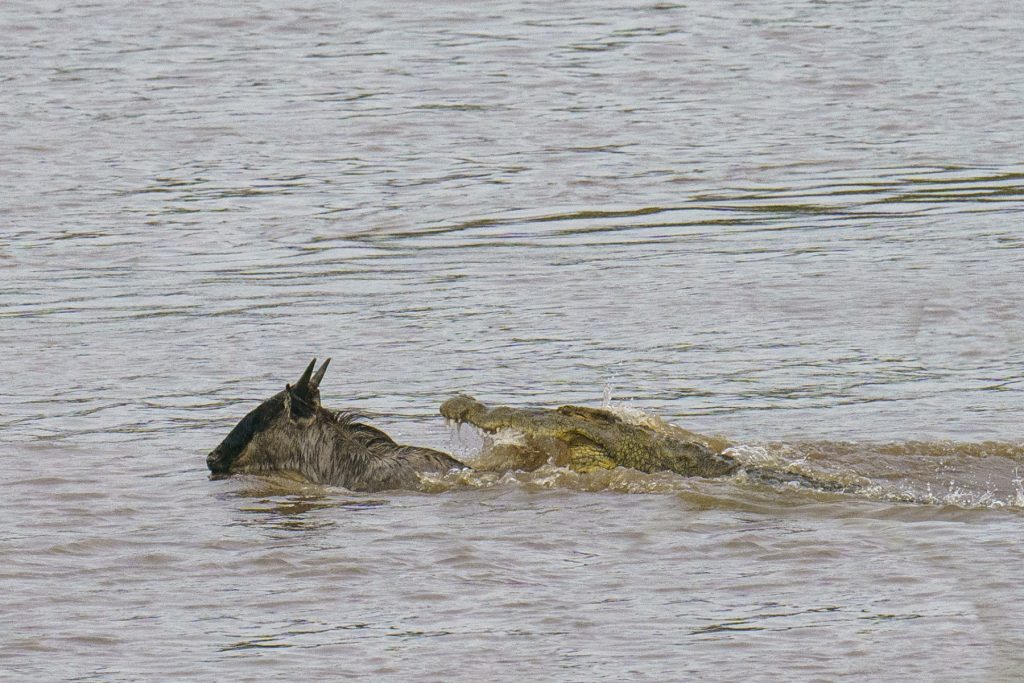 Not all the wildebeest make it (image by Mark Beaman)

Despite the perils you witness on these epic trips, on a personal level I gained an unexpected respect, and even reverence for wildebeest, an animal that I had always enjoyed being around, but was just a bit ambivalent about. 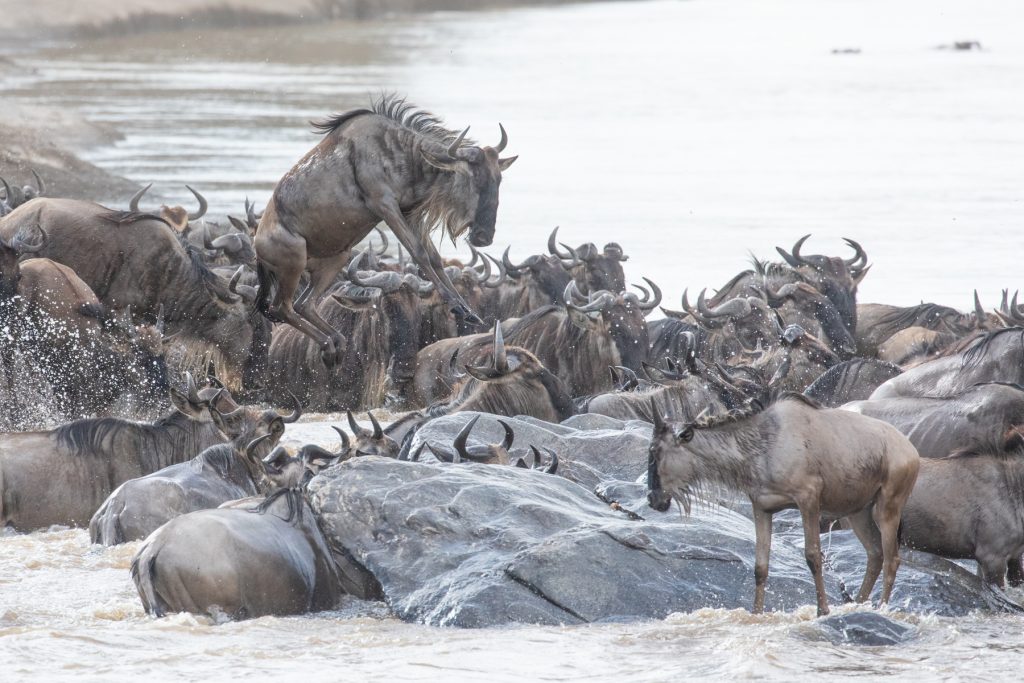 During our time in the Mara we were treated to some out of season stormy weather and rains. While this might spell a nightmare for some photographers, it allowed us a privileged glimpse into what drives this mass of wildebeest to undertake their perilous journey. It’s almost as if wildebeest and zebras can smell the rain coming, in the same vein that humans enjoy that first whiff of water hitting the hot earth.   This seems to spark something off in their psyche and they feel driven to follow these rains in the promise of pastures new. 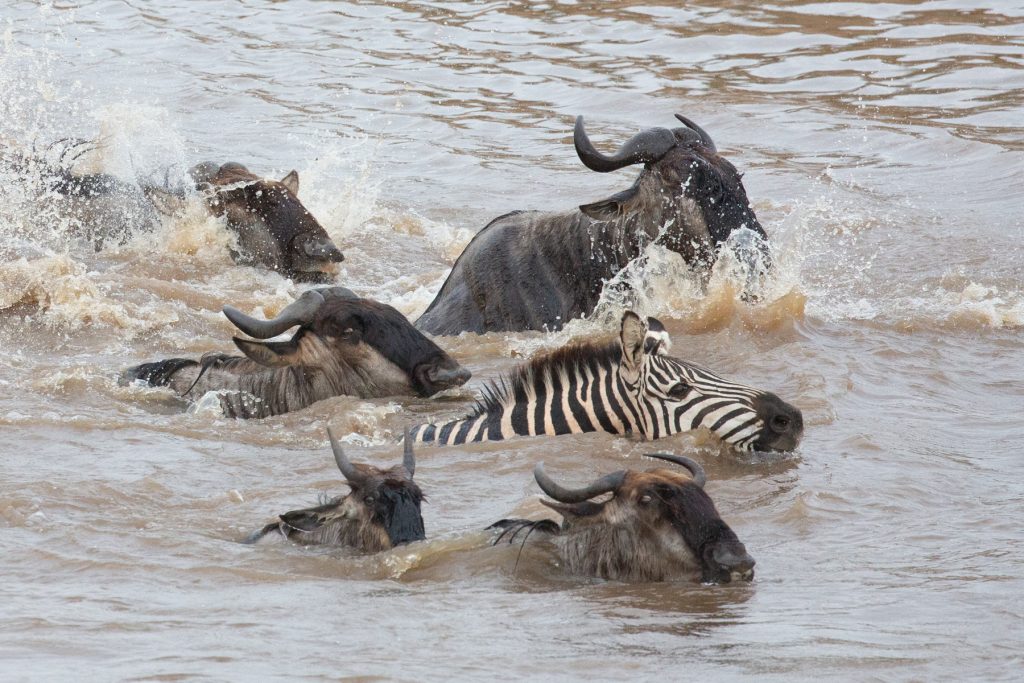 While we sometimes interrupted our own program to take photos of the incredible skies looming large over the plains, it seems we weren’t the only creatures who were beguiled by the inky clouds and bursts of lightening. You could often just see the wildebeest watching the storms on the horizons, joining us in mesmerising stares.

These addictive evening skies triggered something in the herds and, as our guides would say “we’ve seen them gathering at one of the crossings, we should try and go see them first thing tomorrow” we began to prepare for another spectacle. 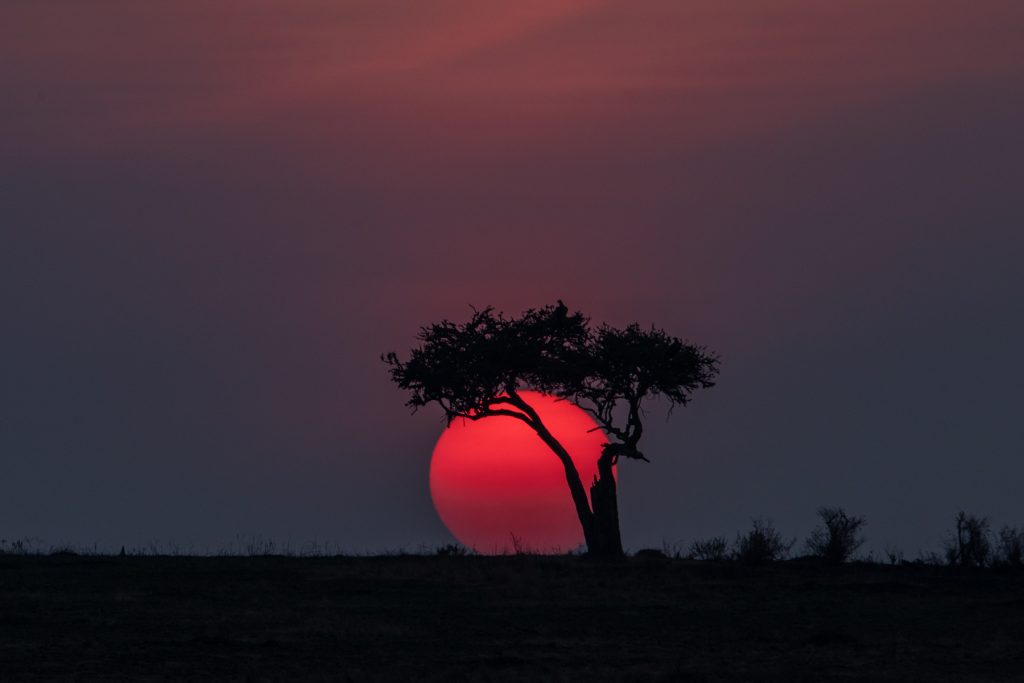 Witnessing the Mara migration first hand was a highlight of my life. Being there with trained photography guides who had a biological knowledge of the process just added to my fascination. I’m happy I went, even if some of the things we saw moved me to tears. Enduring memories I will take with me include the cacophony of sounds and whinnying as the wildebeest and zebras crossed the river, the sheer numbers of animals in the herds and that endless journey of creatures who follow the rains of the Mara. 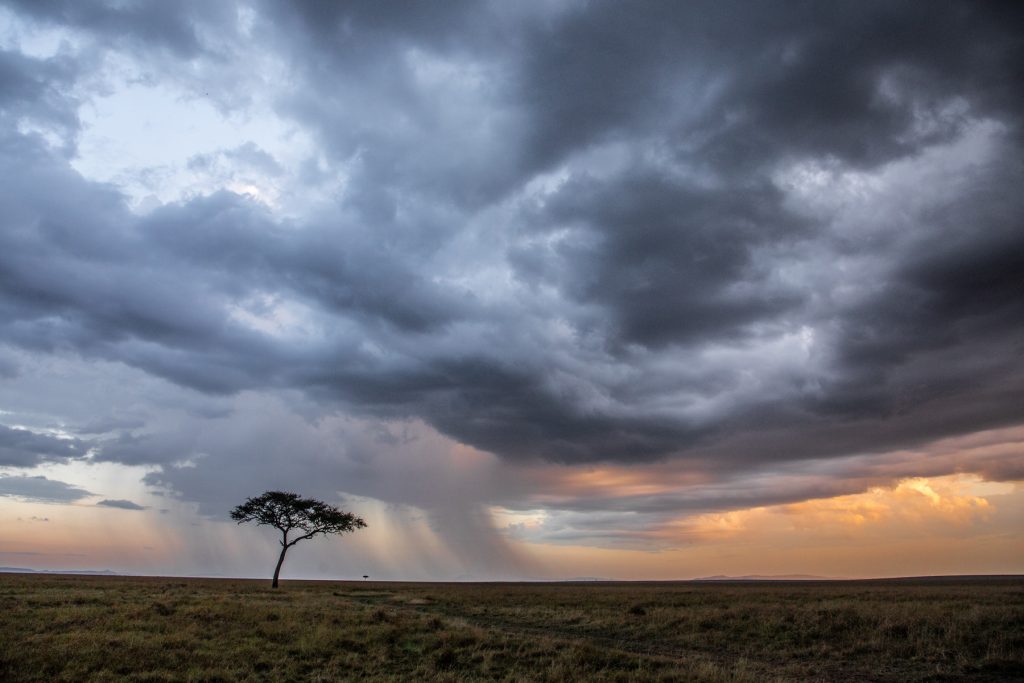 Three Wild Images Photographers at the Atlas of Humanity

So what is travelling like in the Age of Covid?