Home & Tours > Experiences > Zaouli – Behind the Mask of West Africa’s most famous dance!

Zaouli – Behind the Mask of West Africa’s most famous dance! 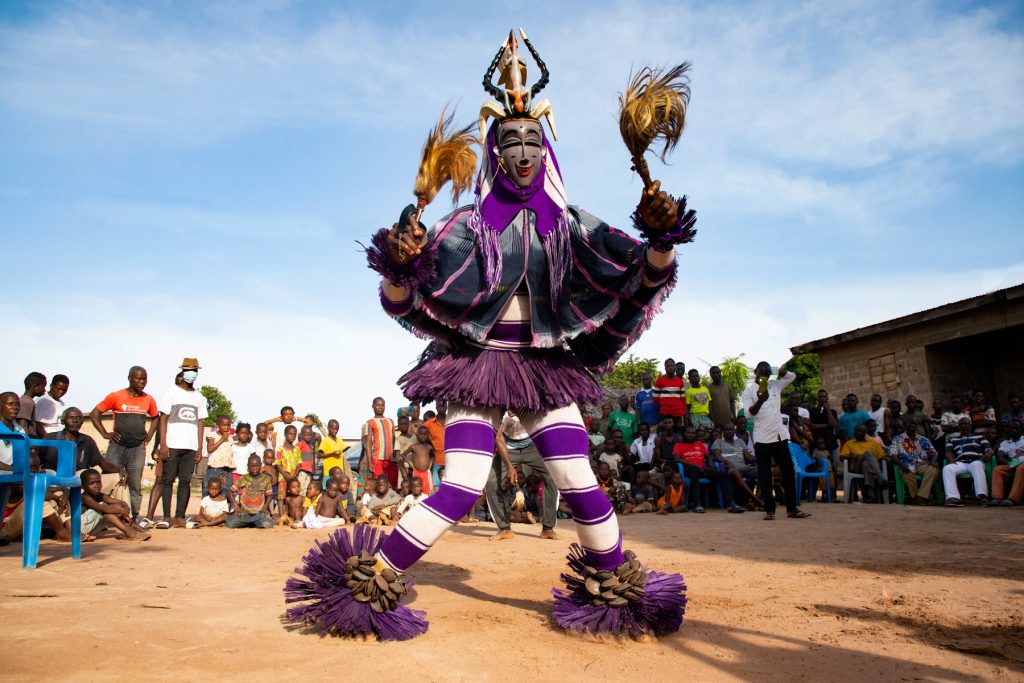 Have you ever wondered what it’s like to go behind the scenes at one of Africa’s most celebrated dances?  Wild Images was recently offered a privileged glimpse….

Zaouli.  It is the dance that has gone viral across our planet by posts on social media networks like Tik Tok, Facebook and Instagram.  This incredible dance involves an almost super-human like series of moves where the dancer appears to only move his legs without his body.

Originating in the Guro people of Ivory Coast (Côte D’Ivoire), seeing a performance of Zaouli was the key reason we decided to visit this lesser visited destination of West Africa and it didn’t disappoint!

The dance of Zaouli is a relatively new addition to the cultural landscape of Ivory Coast.  Created only in the 1950s it was inspired by a young Guro girl, Djela Lou Zaouli (the Lion’s daughter).  Now the generic masks worn by Zaouli dancers carry her name, Djela.

Performed at important celebrations and funerals, it is believed to bring prosperity to the village where it is shown and it is seen as a tool of unity for Guro people.

BOUAFLÉ – A tiny African department with links across the globe

Zaouli originates in the small region of Bouaflé (and to a lesser extent in the neighbouring department of Zuénola), just north of the bustling city of Yamoussoukro.  Until the formation of Zaouli the Guro culture was relatively obscure on the anthropological map of Ivory Coast.  Now this incredible dance has catapulted Bouaflé onto the world stage.  Performed in Europe, Asia and in large celebrations across Africa like Festima in Burkina Faso (featured below), Zaouli has brought fame to not only the Guro people but to the cultures of Ivory Coast in general.

Captivating audiences across the globe, Zaouli was added to the Representative List of the Intangible Cultural Heritage of Humanity by UNESCO in 2017. 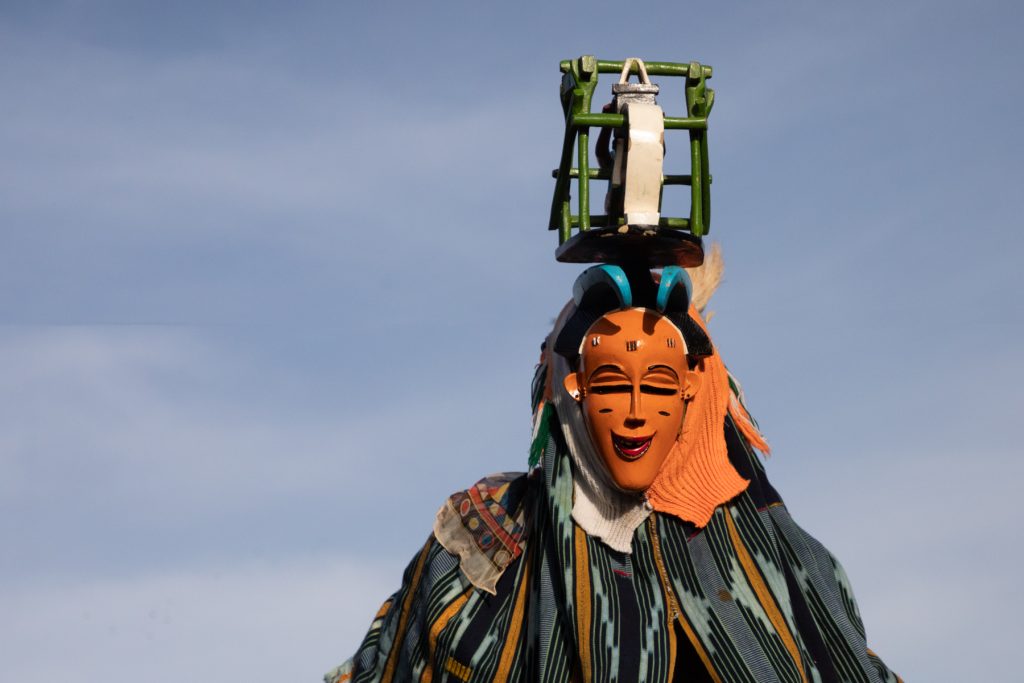 The mask of Sortanvani, representing weavers in the Guro people (image by Inger Vandyke)

THE MEANING OF THE MASK

In Zaouli tradition there are seven different types of masks and during our recent tour we saw three – Zohoulin, Gan and Sortanvani.

Although Zaouli was named after a young girl, the dance is only performed by men and the tradition usually flows through families.

On average it takes a performer seven years to perfect his moves as a Zaouli dancer.  It is extremely physically demanding and during a performance the dancer engages in a psychological duel with his audience.  Holding his body still while his legs perform a myriad of different moves, he is never allowed to repeat those moves during one performance so while they may look similar, the complexity of his feet movements is very difficult to puzzle out and mesmerising to watch. 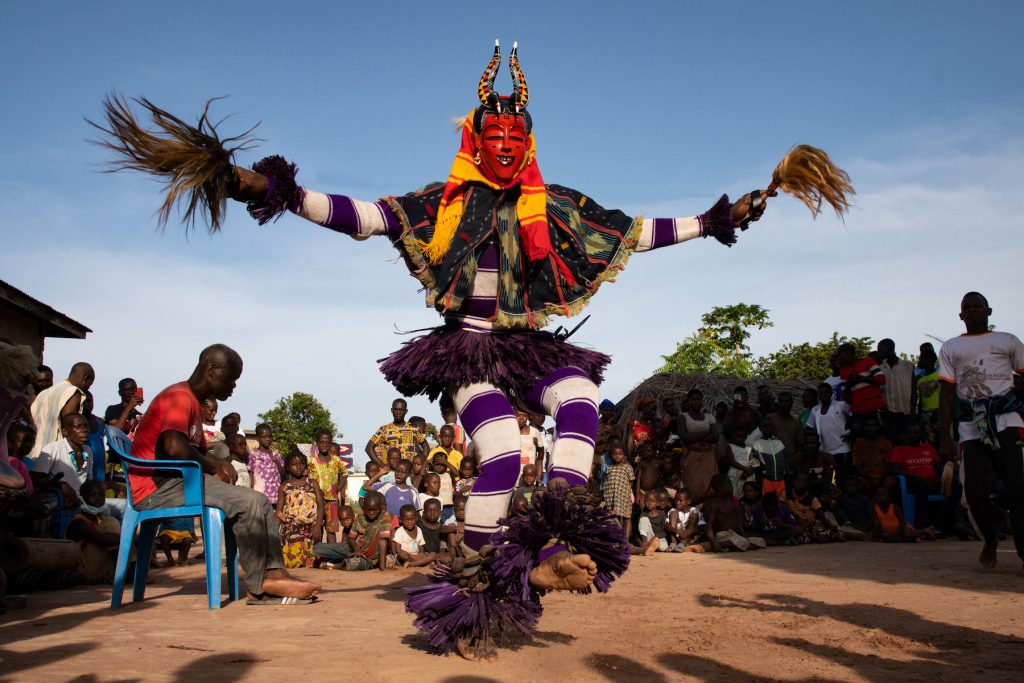 Zaouli Gan. Each Zaouli dance has a series of moves that are never repeated. Training to become a Zaouli takes up to seven years! (image by Inger Vandyke)

Typically he will arrive at a dance arena with his Djela mask covered by local woven cloth and he is accompanied by a guardian who will slowly unveil the Zaouli dancer at the start of his dance.   Usually consisting of a striped bodysuit, raffia wrist and ankle bands and also a skirt fashioned out of the same raffia, a Zaouli dancer will also add to his costume by decorating his ankles with strung bells or seed pods whose sounds add to the wild drumming and horn playing music of his dance. 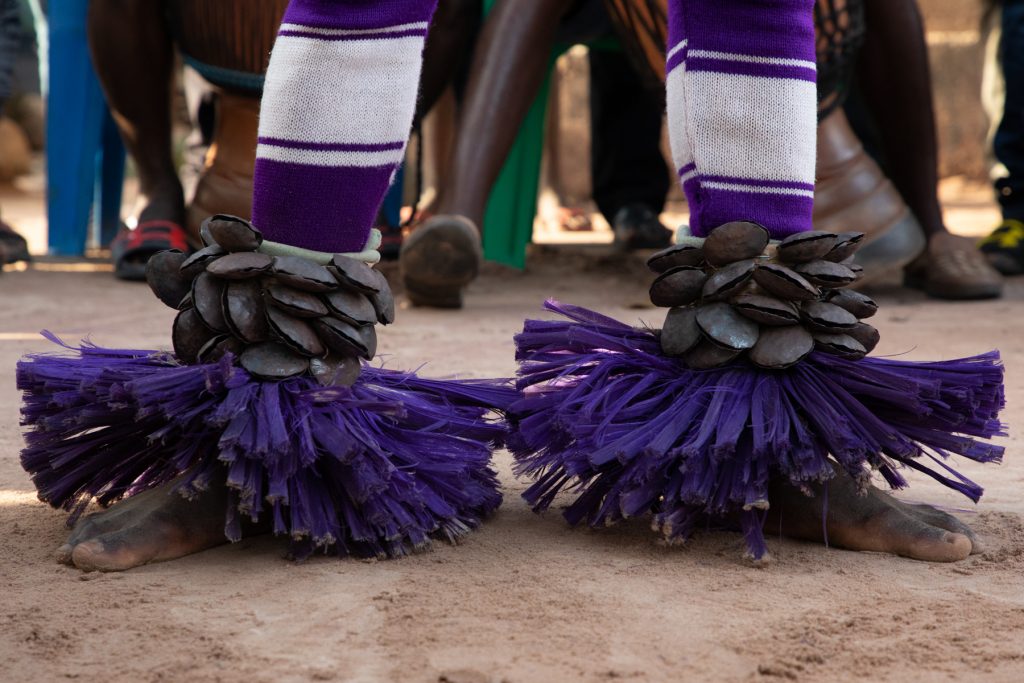 We arrived in Bouaflé late in the afternoon.  A source of great cultural pride and a blessing to the village where it is performed, Zaouli attracts people from all over the region of Bouaflé so we joined the assembling crowd.

A Master of Ceremonies arrived and walked the dance arena.  In our case it was a village elder dressed in a very smart suit that featured the traditional warrior print of Angola, Shanakaka.  I looked on with interest at this odd introduction to Ivorian culture on the master’s suit and wondered what inspired him to wear it. 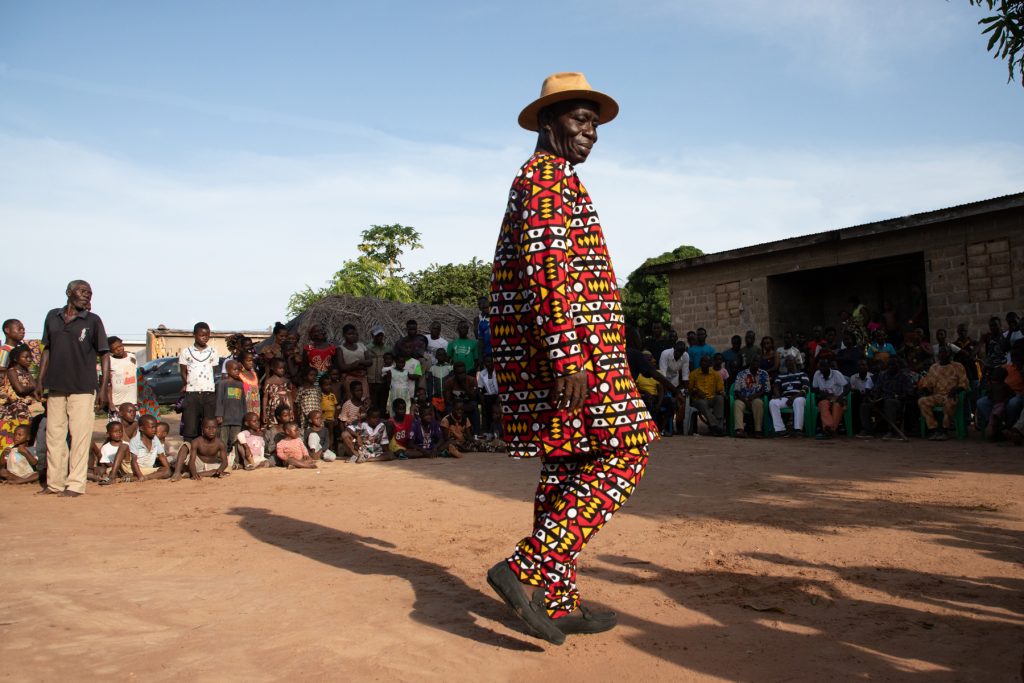 A Zaouli Master of Ceremonies walks the edge of the arena to welcome the crowd. Oddly he is dressed in Shanakaka, the warrior decoration print of Angola (image by Inger Vandyke)

That thought soon left my mind when a young boy in plain clothes appeared on the dance floor.  We soon realised that this boy was the latest in a long line of Zaouli dancers in the family of performers we were to meet. 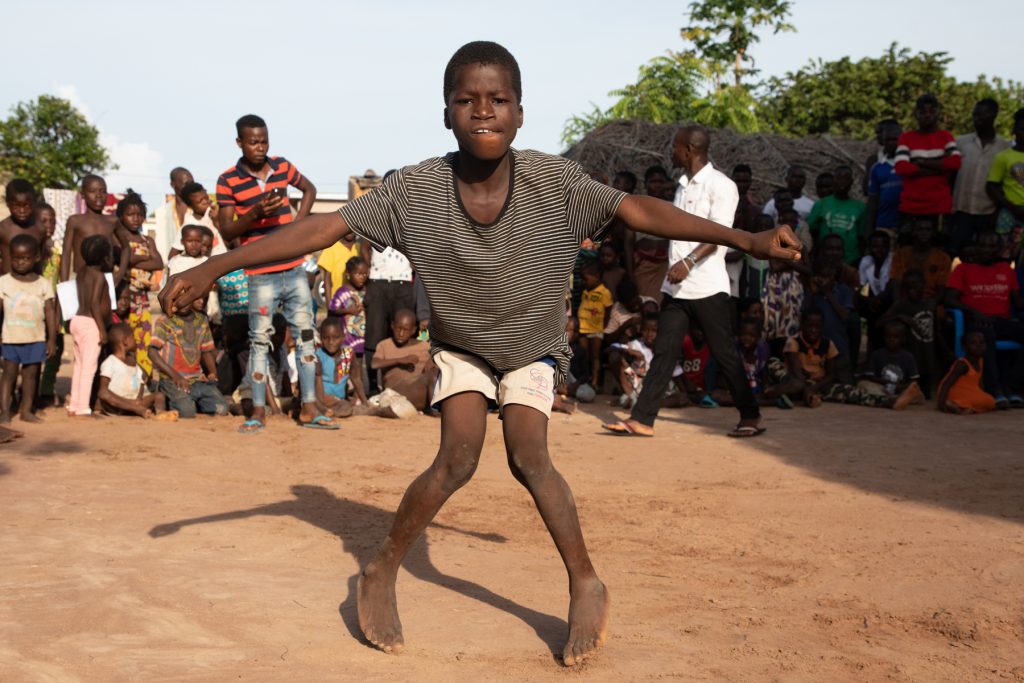 Summoning the crowd with his hand gestures sent many into a frenzy.  He was looked at with so much admiration and reverence. He then started to dance, and although this young lad was a beginner Zaouli, he had already learned so many moves as part of his repertoire and between his dance acts the excited crowd motioned him to come over so they could tip him small money, such is the esteem that Zaouli dancers command with their audiences, even when they are in training!

Riveted we watched as the main Zaouli dancer was guided into the arena.  He was wearing the grey mask of Zohoulin, one of the most famous Djela of his culture, which features a chicken eating a lizard and symbolizes an ideaological struggle between the Guro and neighbouring ethnic groups where Zaouli prevailed.  Initially he was guided over to a seat as more local people joined the crowd in excited anticipation. 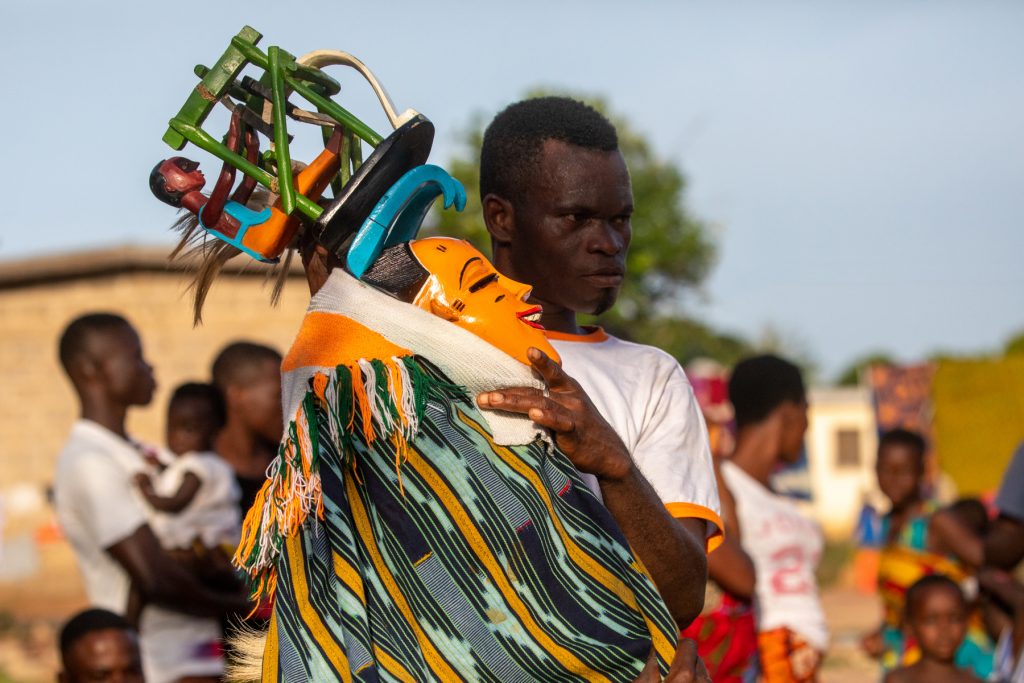 Waiting for the right prompt, a guard guides a Zaouli into his next performance (image by Inger Vandyke)

We were lucky enough to catch a few shy smiles of our dancer as he took a few cautious looks at the adoring crowd around him.  From experience I know that actually seeing a dancer behind the mask is usually an act of privilege, for these dancers are not seen as humans by onlookers.  Instead they are viewed as the living embodiment of the spirit world.  When they dance their superhuman acts, their body is moved by the spirit that has engulfed them. 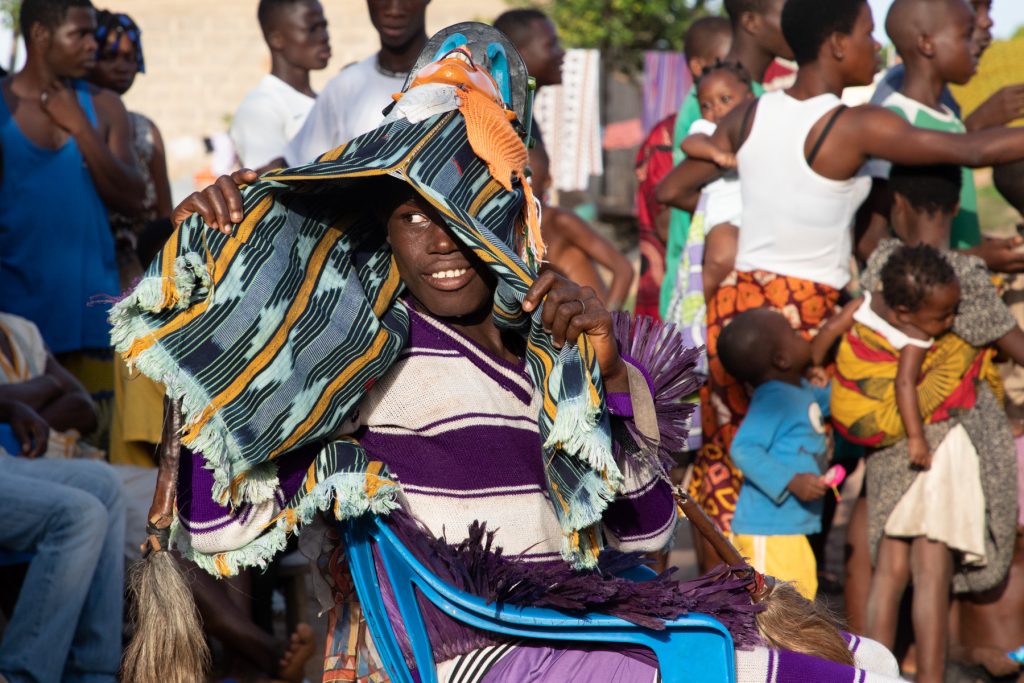 “Can I start now?” Our Zaouli dancer takes his cue from his guardian (image by Inger Vandyke)

And then he began.  Slowly his Djela was unveiled by his guardian and he rose to face the crowd, nodding his head to get their attention and waving small hand whips made from animal fur.  He moved around to make sure everyone was watching as the music built in anticipation.  Finally he jumped into a fantastic set of moves and the crowd went wild!

Two other separate dances ensued, that of the red mask of Gan, which symbolises the strategy of game animals like antelopes to avoid being caught by hunters, and finally the orange mask of Sortanvani, representing weavers in Guro culture.

We were enthralled and we never wanted it to finish.  At the end we greeted the Master of ceremonies and offered him wine, gifts and money as a thank you gift for allowing us to join in such an important celebration of Guro culture.

Expecting a rejection, I asked if it would be possible to go and give a gift to the dancer himself.  My first thoughts were that we would be able to see him wearing his mask only.  That we would never, ever be allowed to see the actual dancer.

We were led to a small and nondescript building away from the arena. Guro elders had crowded around the door and when our Zaouli found out we wanted to meet him we saw him emerge from the door.  I was in total awe!  I asked if we were allowed to take photographs and again, I expected the answer to be “No”.  What a surprise then when our dancer said it was fine. 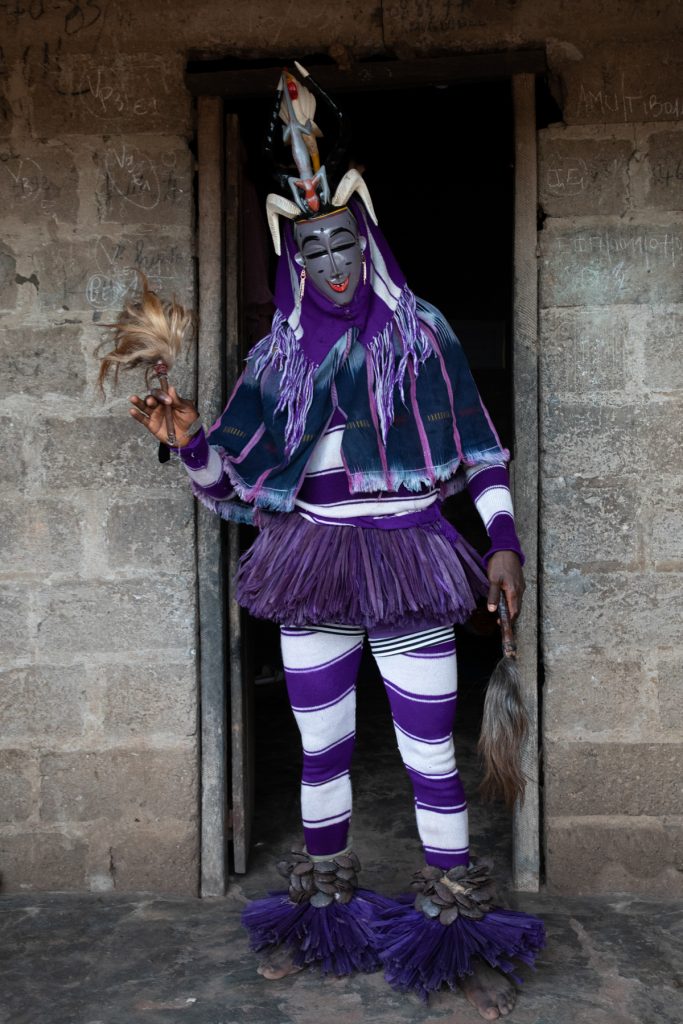 I think I may have been in some level of shock as the exact events that transpired afterwards are a bit lost on me now but we somehow ended up in the small room of the building with the unmasked Zaouli dancer showing us the different Djela he used and allowing us to photograph him holding the Djela!!!!!  What an incredible and totally unexpected privilege!

At the end of our photo session with him, I handed him a tip and hugged him saying “Thank you! Thank you! Thank you!” Perhaps it was his incredible talent or the fact that, after years of wanting to see Zaouli we had finally watched a live performance, I somehow was shaking when we left. 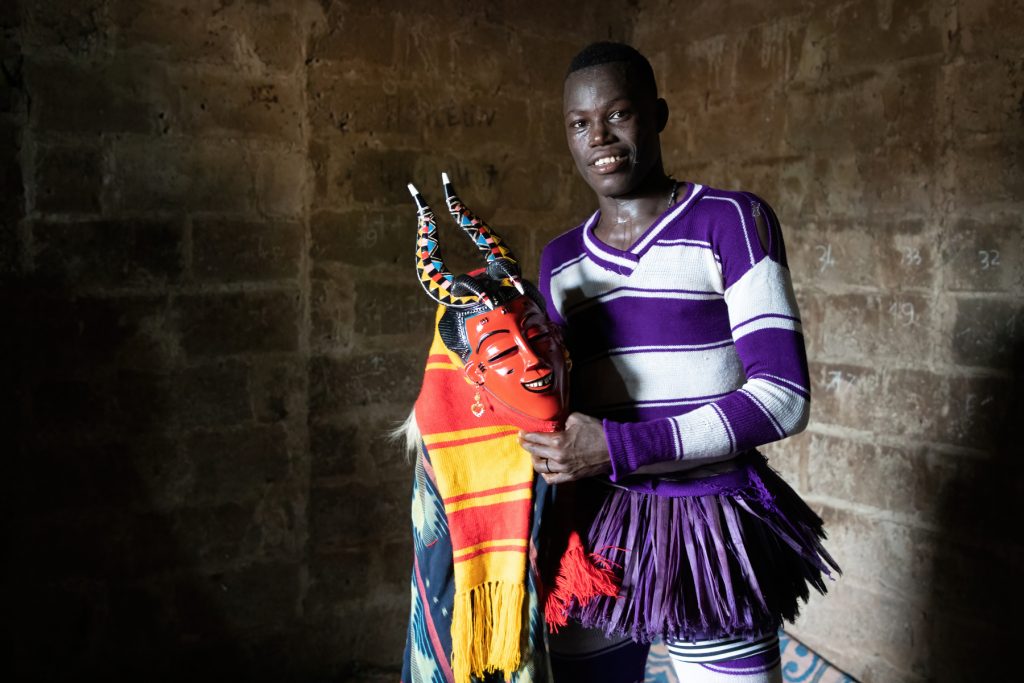 A privileged invitation to meet the man behind the Zaouli mask. What an experience! (image by Inger Vandyke)

We were just so lucky to meet him.  For certain I will see Zaouli on my future tours to the Ivory Coast but to go behind the scenes was an act of serendipitous good fortune and spontaneous planning from our guides.  A brief moment of magic that will stay etched in my soul forever…..